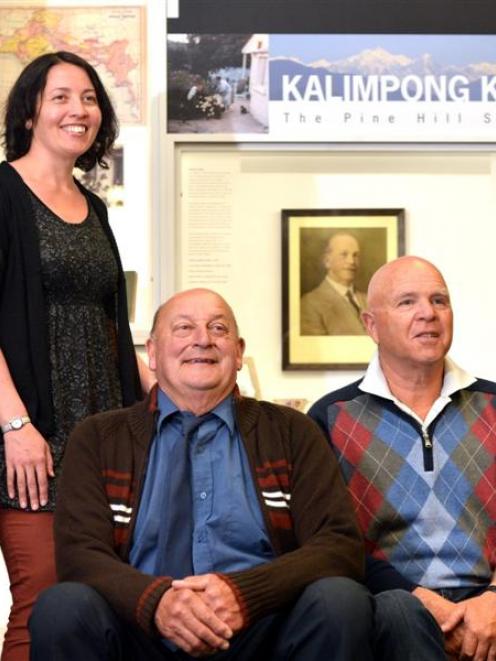 Kalimpong researcher Jane McCabe, her father Don McCabe (centre) and Gilbert Hawkins in front of a Kalimpong exhibition at Toitu Otago Settlers Museum in Dunedin. Photo by Peter McIntosh.
Descendants of missionary school Anglo-Indian children who came to New Zealand last century to start new lives have gathered in Dunedin for a reunion.

Organised by researcher Jane McCabe, of the University of Otago, the reunion has drawn about 70 people, who are descendants of about 30 of the 130 ''Kalimpong Kids'' who moved to New Zealand.

Ms McCabe, a teaching fellow, has completed her PhD on the Kalimpong Kids, and will be capped in a couple of weeks.

The mixed-race children of British tea planters and native women grew up in an institution established in 1900 by Scottish Presbyterian missionary the Rev Dr John Anderson Graham in the town of Kalimpong in India's Darjeeling district.

Ms McCabe's grandmother, Lorna Peters, was one of them, arriving in Dunedin in 1921.

The first half of the Kalimpong Kids came to Dunedin, but later arrivals went to Wellington, where an organised support network developed.

Many of those who arrived in the South moved to the North Island, because of the support network.

Only a handful at the reunion are from Dunedin, most having come from the North Island, and three from Australia.

''Everybody who I've been in contact with has been very enthusiastic and very generous in sharing their family information, even though it's quite sensitive.''

Ms McCabe visited the only known living Kalimpong Kid, a 93-year-old woman in Queensland, who was unable to attend.

She has been in contact with about 70 families in the course of her research.

Many of the families had been to Kalimpong.

''We've all been making these individual journeys over the past 10 or 20 years, not realising that all these other people in New Zealand are making the same journey.''

The home in Kalimpong kept excellent records, with a file on every child, and material such as letters intact.

Going to Kalimpong was ''transformative'' for people, as it was not the foreboding institution they imagined.

''Because their parents have been silent, they think it must have been really bad, and then they go there and Kalimpong is this lovely little town, and the home itself does have quite a nice feel to it.

''It's cottages, not a big institution.''

One who has made the journey is Te Hana resident Gilbert Hawkins, whose late father, Richard, grew up in Kalimpong.

Mr Hawkins said he was impressed with Kalimpong and the extensive records.

''I always thought my grandfather did not do the proper thing for my father in putting him into an orphanage. But on visiting Kalimpong, and going to the home, I quickly realised that he had done the very best he could for him.''