Ringing in the change message 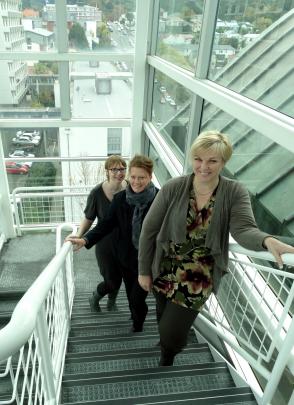 Information technology and the aged-care sector are expected to continue to be big growth industries in Dunedin over the next 15 years, but the city's future prosperity could go either way, a group of business academics say.

Researchers on the Future of Work study - carried out in 2013 and released this year - say everyone needs to be prepared for a changing and challenging business environment.

The four Dunedin women from the Otago Business School canvassed the views of 44 business and community leaders about the future.

Otago Business School senior lecturer in management Dr Sara Walton said many people were not as positive as she would have expected but it was at a time when cuts to Invermay's Dunedin operations had just been announced.

''I think Dunedin was in a little bit of a dark patch back then . .. There was a number of comments coming through back then about the lack of leadership in Dunedin in terms of the wider issues of centralisation and globalisation.

''Even though people might have been slightly negative they [those surveyed] did want people to start thinking about the future because if we don't start planning for the future we might end up in a situation we don't want to be in.''

The study then pitched two different scenarios of the future at those surveyed.

One was a pessimistic view of Dunedin in 2030, with a slightly lower population of 120,000 people and few job prospects.

The other had Dunedin going through a period of ''transformative change'' with a population that had swelled to 200,000.

Another researcher, senior lecturer Dr Paula O'Kane, said the effect of technology and the ability of people to work from anywhere could be either positive or negative for Dunedin.

She said Dunedin could actually lose skills and some of its talent pool overseas, because although those people were still living here they were working for companies out of the city.

The city could also gain skills in exactly the same way.