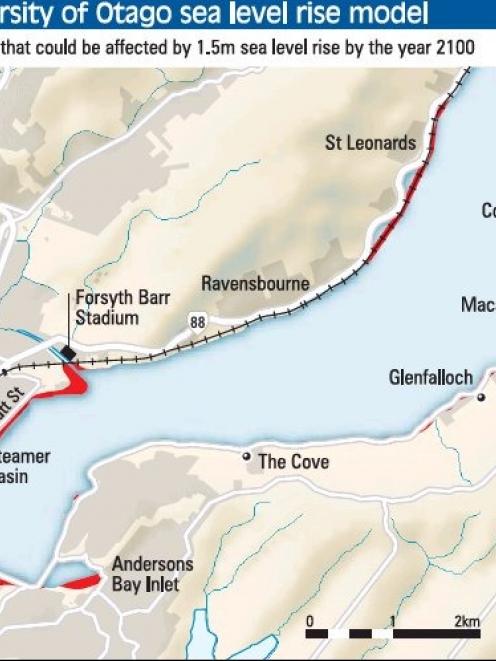 Water lapping over the Forsyth Barr Stadium site, parts of Portsmouth Dr under water and roads crumbling into the sea on the Otago Peninsula - it is a grim picture painted by a University of Otago climate change model.

And according to experts, the first signs of climate change - which some scientists fear could bring a sea-level rise of up to 1.5m over the next 90 years - may already be emerging in Dunedin.

Otago Regional Council records highlighted a significant increase in the intensity of rainfall events in the past decade, resulting in more flooding within the city, ORC strategy manager Mike Goldsmith said.

However, the data also showed the overall amount of rain falling on the city was declining, even as the one-off events intensified, he said.

The changes were consistent with climate-change predictions, although it could not be confirmed and could yet prove to be "natural variation", he said.

"That's what's predicted to happen and that's what has happened over the last few years," he said.

Tidal-gauge data from the Dunedin harbour basin also showed the sea level was already creeping up at a rate of 1.3mm a year, according to University of Otago professor John Hannah, of the national school of surveying.

The rate, based on measurements dating back to 1899, would equate to just a 12cm increase in Dunedin by 2100, but the pace was expected to increase, he said.

There were no signs yet the rise was accelerating, but a University of Otago masters student planned to study that next year, he said.

Prof Hannah said he, like many climatologists, expected sea-level rise to speed up as ice in Greenland and the Antarctic melted more quickly, but a 1.5m rise by 2100 might be "a little speculative".

He was more comfortable with the latest predictions by the Intergovernmental Panel on Climate Change (IPCC) in 2007, which predicted a 0.6m rise by 2100.

University of Otago geochemist Abigail Smith, of the marine science department, said a computer model she helped develop highlighted the challenges the city might face.

It showed a 1.5m sea-level rise left unchecked by engineering or adaptation would have a dramatic affect on parts of the city's coastline, swamping Portsmouth Dr and the harbour mouth of the Water of Leith, where the Forsyth Barr Stadium was being built.

That meant a 1.5m rise in sea levels would still leave the stadium floor 2.2m above the water level, and underground features - such as piles and drainage pipes - were also designed to handle flood scenarios, he said.