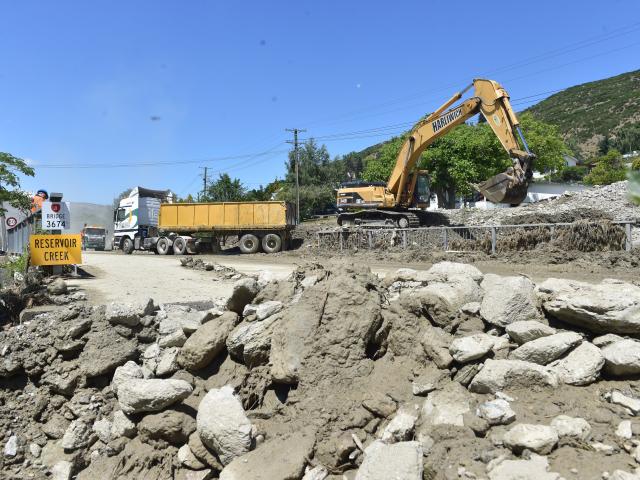 An investigation is under way after a 50-year-old Fulton Hogan staff member working on the flood cleanup in Roxburgh received a minor electric shock when he touched a live wire yesterday.
The Clutha District Council's response to June flooding exposed a lack of local input in the council's emergency management, a West Otago Community Board member says.

Welfare centres were set up last night in four North Otago towns along State Highway 1 to provide accommodation and food for motorists trapped by floodwaters.

Flooded highways have cut Dunedin off from the north and civil defence authorities say homes in the Waitaki may have to be evacuated with rivers running at record highs.

Aramoana residents are fed up as about a dozen properties remain under water and the Dunedin City Council is not stepping in to help, Aramoana League member Vicki Wilson says.

Several North Otago roads were closed and the Kakanui River was in flood last night.

A community board member has criticised the "pathetic" response to a flash flood in Mosgiel that caused thousands of dollars in damage to shops on Saturday afternoon.
Those living and working in flood-prone businesses and households will be reminded of the risk this week when staff from the Queenstown Lakes District Council and the Otago Regional Council start their annual flood awareness campaign.

The Waitaki District Council is still not sure how long it will take to repair the damage caused by this week's floods, which it estimates may cost at least $500,000.

Road repairs in the Waitaki district will "step up" next week once floodwaters have receded and it becomes clearer what work needs to be done after heavy rain during the past fortnight culminated in major flooding this week.

Farmers, residents and businesses in North Otago and East Otago start a massive clean-up today, following two weeks of rain which caused an estimated $1 million in flood damage, but the MetService has warned more wet weather is on the radar.

The death toll has risen to 105 in floods caused by heavy monsoon rains in India's north-eastern state of Assam, while hundreds of animals died in the region's Kaziranga national park, officials say.
Blocked roads have been cleared across the Tasman District after an easing in the heavy rain which hit the region overnight.
Freak tides could flood parts of the Auckland motorway network tonight and tomorrow.
A police officer and a companion hiked 6km over hills and through flooded creeks to get much-needed supplies to a pregnant woman and two children, trapped at home by floodwaters on the East Coast.
Residents of four towns have been evacuated as floodwaters covering an area the size of France sweep across NSW.
Floodbank and works on the lower Waitaki River and at Henley could soon be protected by an Otago Regional Council bylaw.
A change in the order of flood protection works to be completed along the Water of Leith during the next seven years could affect rates.

The destructive deluge of wet weather is coming to an end in the worst-hit areas, with rain easing in Nelson and clear skies in the Far North.

Flood warnings attached to properties based on computer modelling of climate change and a one-in-100-year flood could unfairly devalue Dunedin homes, and expose the Dunedin City Council to a legal threat.