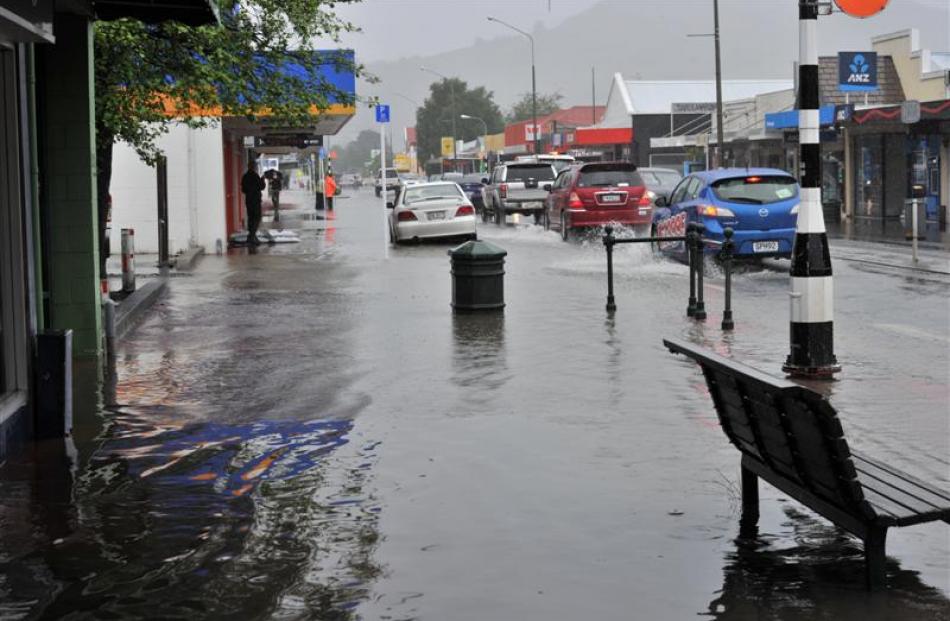 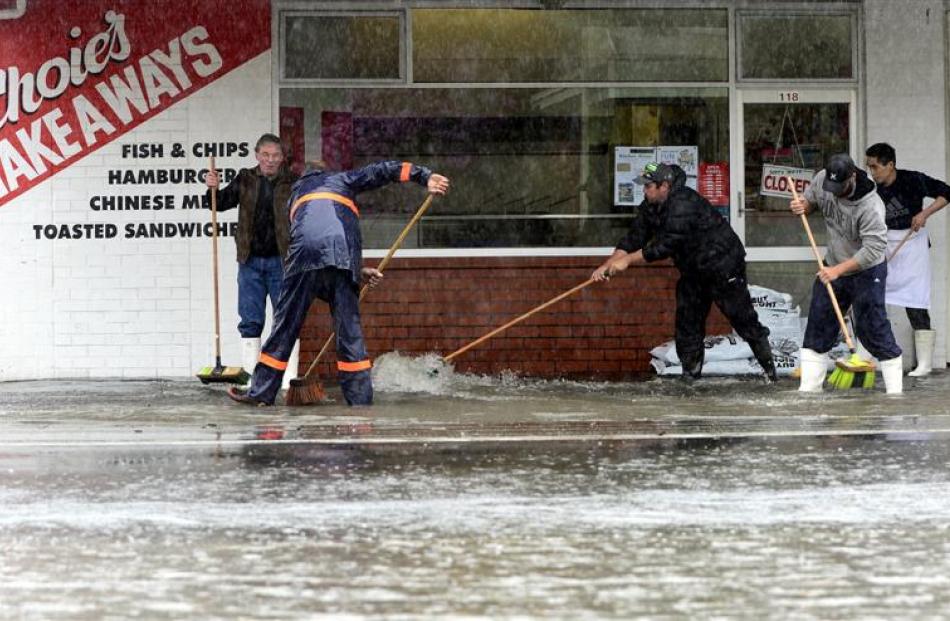 Trying to keep the water away from Mosgiel businesses are (from left) Larry Greenall, Jeff Wilson, Simon Greenall, Tim Greenall and Warren Choie. 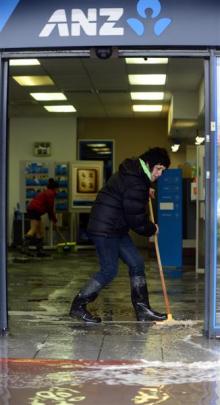 Sandra Wilson sweeps water out of the ANZ bank.

A community board member has criticised the "pathetic" response to a flash flood in Mosgiel that caused thousands of dollars in damage to shops on Saturday afternoon.

However, Dunedin City Council staff yesterday said problems with stormwater pipes in the area were well known, and plans were already being drawn up to fix them.

Water poured into about a dozen shops on Gordon Rd, from about Cargill St to Factory Rd, after a downpour about 1.30pm.

Shopowners used brooms to sweep away the encroaching water which entered some business premises, damaging carpet and displays.

Bags of compost hastily deployed by Mitre 10 staff protected some shops, most of which were shut at the time of the deluge.

Mitre 10 assistant manager Ricky Bray said some water entered the store, although not enough to damage it, but other shop owners were asking why the Fire Service had not acted.

Mosgiel Taieri Community Board member Martin Dillon said Mosgiel was lucky it had Mitre 10 staff and their public-spirited action, because it had been let down by the Dunedin City Council's contractor, Fulton Hogan.

It appeared only two Fulton Hogan contractors attended the flood.

"The big problem is there has been no response. It's just pathetic."

The lack of response was indicative of Dunedin's attitude to Mosgiel, he said.

Mr Dillon, who also owns commercial property in Mosgiel (his was unaffected), said the deluge had overwhelmed the stormwater system, which should have coped and needed upgrading.

However, council roading maintenance engineer Peter Standring said problems with inadequate stormwater pipes in the area were already well known and the council was planning to upgrade them.

"The stormwater pipes haven't got the capacity to deal with this sort of event. That has actually been known for some time," he said.

Details of what was planned to fix the pipes - and when - were not available yesterday.

Mr Standring said Fulton Hogan contractors were not responsible for the stormwater pipes, but were charged with keeping mud tanks clear of debris, and they had been "very clean".

Beyond that, there was little the contractors could do but monitor the situation until the water drained away about half an hour later, he said. "[Contractors] can't make water disappear."

Mr Dillon also questioned why the Fire Service did not start pumping out the shops. Lookout Point station officer Wayne Stephenson said there had been nowhere for firemen to pump the water.