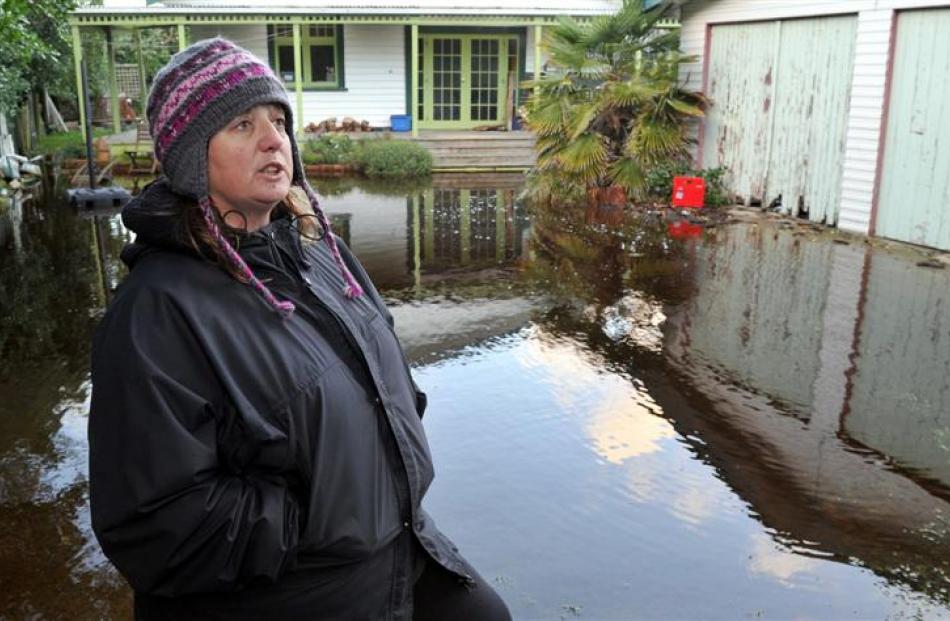 Aramoana League member Vicki Wilson stands next to one of about a dozen Aramoana properties which have been flooded by a combination of heavy rain and high tides. Photo by Craig Baxter.

Aramoana residents are fed up as about a dozen properties remain under water and the Dunedin City Council is not stepping in to help, Aramoana League member Vicki Wilson says.

Ms Wilson said about a dozen properties remained under water yesterday. The flooding was caused by a combination of high rainfalls and very high tides.

The community was fed up with still having to deal with flooding and, while the Fire Service had been in over the weekend and drained sections, many had since re-flooded, she said.

''We just don't seem to be able to move this water,'' Ms Wilson said. Residents felt as though they had been abandoned by the council and it had instead been up to volunteer firefighters and locals to pump out the water themselves, she said.

She was also concerned about the possible health effects as sewage had leaked from septic tanks into the flooded water and was causing the town to smell.

''It's a week now that some of these sections have been sitting in septic tank-seeped water,'' she said.

No-one had any idea when the water level would drop enough so sections would not be re-flooded, but in the meantime it would continue to be a stressful time for residents with flooded properties. Paloona St was the worst affected.

Council acting water and waste services manager Gene Ollerenshaw said the council had assessed the situation in Aramoana and found the public health risk caused by the flooding was low.

This, the fact the Fire Service volunteers were doing such a good job and because council staff were busy dealing with issues elsewhere was why the council had chosen not to step in, Mr Ollerenshaw said.