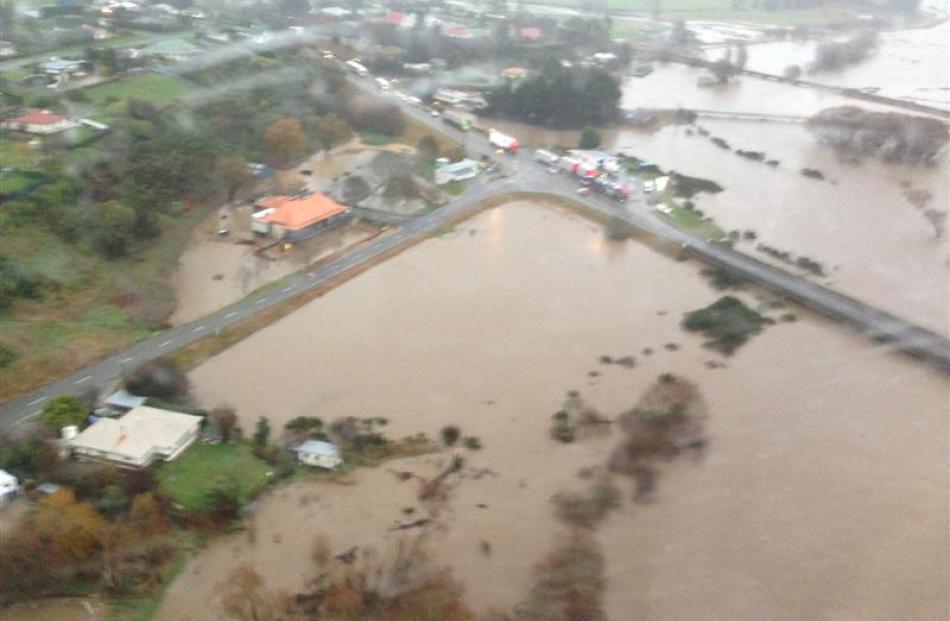 Traffic on SH 1 is stopped at Maheno just south of the Kakanui River bridge (centre right) when the river burst its banks at Mill Dam and flowed across the road. Photo by Peter Muldrew 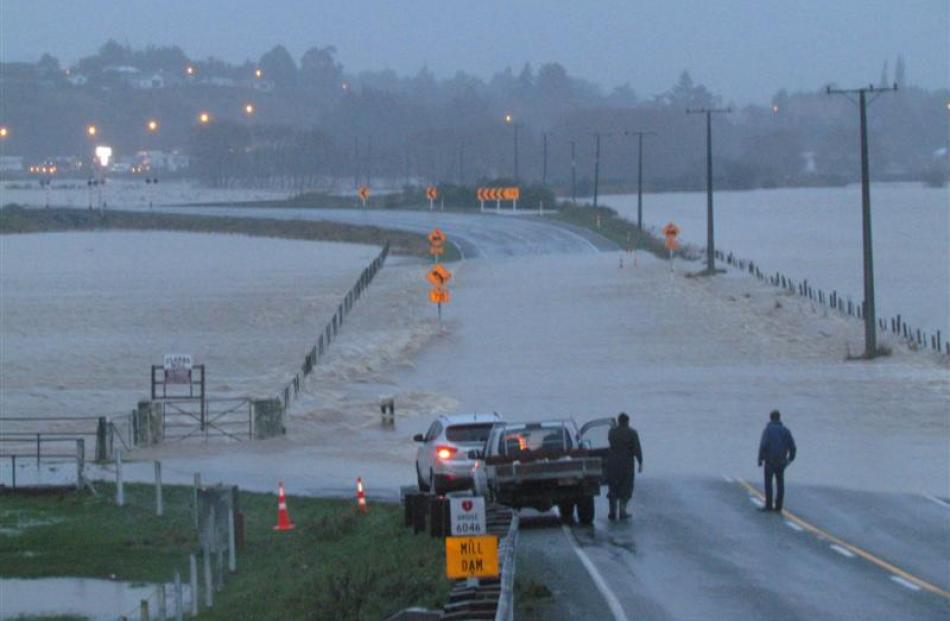 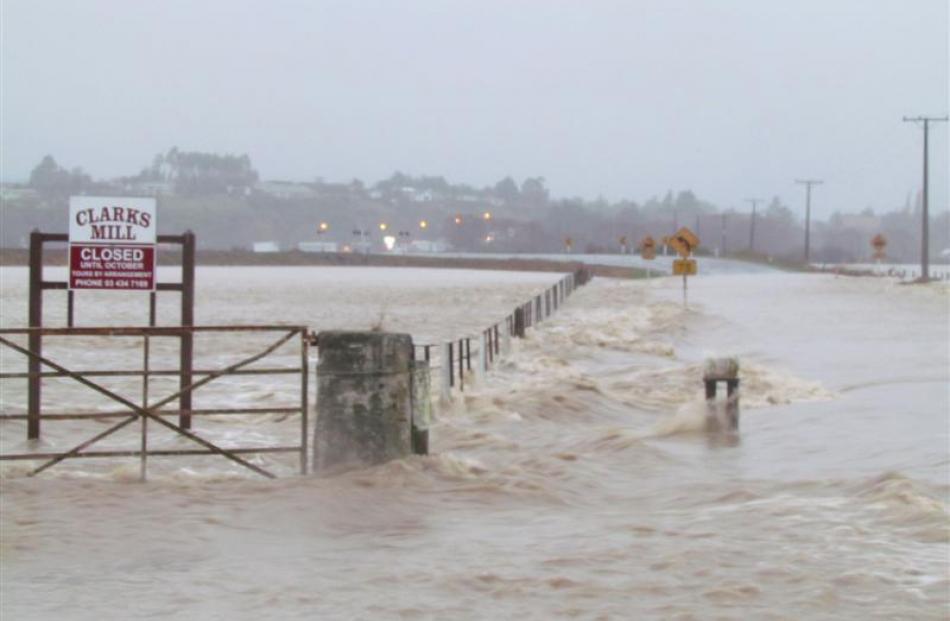 Flood waters... State Highway 1, near Maheno is closed due to flooding this morning. Photo by Andrew Ashton 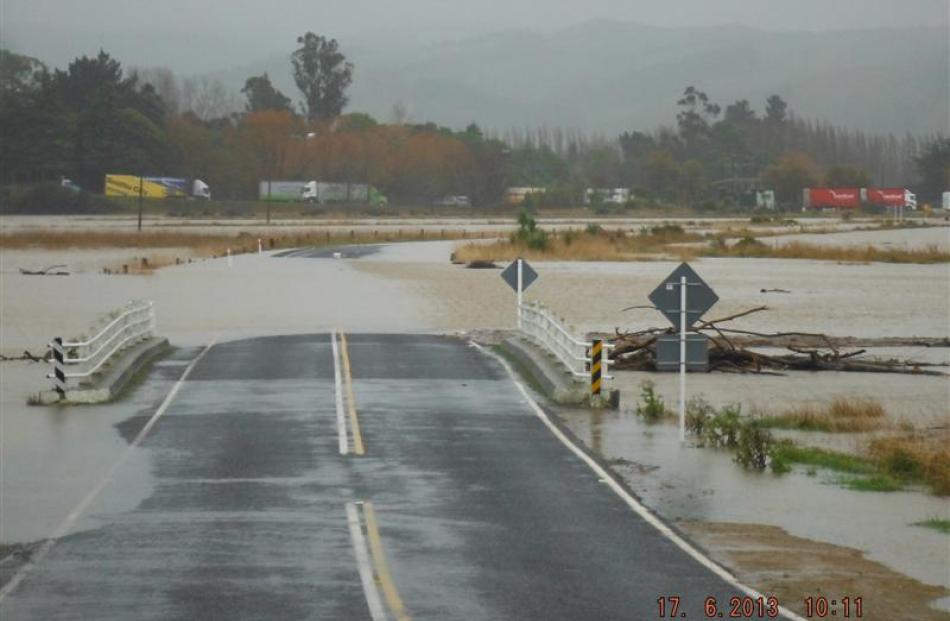 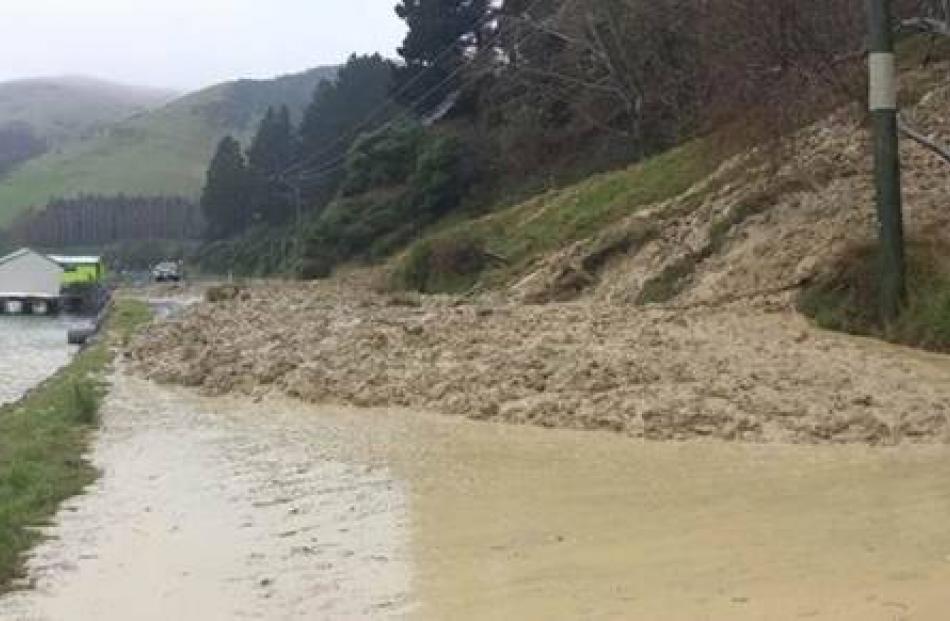 This slip is on Harington Point Road between Portobello township and Weir Road. Photo by DCC

Flooded highways have cut Dunedin off from the north and civil defence authorities say homes in the Waitaki may have to be evacuated with rivers running at record highs.

Waitaki's Civil Defence said it would start looking to evacuate homes if rivers continued to rise.

"It's starting to get close to the houses at Kakanui itself on the north side."

Waitaki residents have been advised to stay indoors and check on elderly neighbours.

Dozens of roads in the region are flooded and State Highway 1 between Dunedin and Oamaru is closed at several points.

The rain had eased now (about midday) and he hoped rivers had reached their peak.

"It's a bit of a different story for the Taieri (River) though.

"At the moment the Taieri's sitting at just about 1000 cumec metres a second, we're expecting that to get to at least 1200."

About 100mm more rain was forecast for the region.

All rivers from Milton north to the Waitaki River are at flood levels, causing widespread surface flooding, and are continuing to rise. Heavy rain is expected to continue in many areas of Otago for at least 12 hours.

State Highway 1 is closed from the Waitaki River Bridge to Pukeuri. Caution is advised at Maheno, from Milton to Clarksville Junction and from Pukeuri to Oamaru.

The Coast Road to Waikouaiti and State Highway 1 from Big Kuri Creek to Hampden have reopened and contractors are on site to help vehicles travel through surface flooding, but delays are to be expected.

State Highway 87 is closed from Hude to Kyeburn.

In Dunedin slips have closed sections of Portobello Road and Harrington Point Road.

At 3.30pm 21 roads were closed in the city because of flooding. Among them were Flagstaff/Whare Flat Road, Silverstream Valley Road, Gladfield Road, Apes Road, Garthmyle Road and McGrath Road.

In North Otago at least 20 roads are closed because of flooding.

Persistent rain and surface flooding has closed two roads in the Milton area. Toko Mouth Road is currently closed from Tokoiti to Toko Mouth and Table Hill Road is closed from the railway crossing to Scott Road, is also closed.

Surface flooding is prevalent on roads in Milton and surrounding areas and motorists should take care in the conditions.

Many Otago rivers are running at flood levels, causing widespread surface flooding. Heavy rain is expected to continue in much of Otago for at least the next 12 hours (as at 1pm).

Taieri - The Taieri River is continuing to rise and is expected to remain at flood levels for at least 12 hours. Water is flowing into the East Taieri upper pond of the Lower Taieri Flood Protection Scheme. The spillway gates will be lowered in accordance with standard operating procedure.

The recently upgraded Riverside spillway is performing as expected. The Silver Stream is not expected to flow over the Gordon Road spillway.

Lower Clutha - The Lower Clutha is rising steadily and will remain high as water from upper catchments drain into it.

Pomahaka - The Pomahaka River is at flood alert levels and is expected to remain high for the rest of the day.

North Otago catchments - Most North Otago rivers have peaked, but are expected to remain at high levels for at least 12 hours. The Shag River at The Grange is still rising.

Central Otago - The Manuherikia River is running high at 100 cumecs.

Dunedin streams - Flows in the Water of Leith and Lindsay Creek are higher than normal, but are not expected to cause surface flooding.

"Many rural water schemes have been turned off and residents are advised to boil and conserve water,'' Waitaki Civil Defence public information manager Elton Crane said.

Residents should also conserve and boil water in the Awamoko rural water scheme.

He added that the rain event is expected to continue for "several days", and if possible, people should check on elderly, disabled or vulnerable neighbours and offer assistance.

Rockfalls in the Cromwell Gorge forced the closure at 7pm yesterday of State Highway 8 between Clyde and Cromwell but it has now reopened.

Earlier in the day, police and contractors cleared a minor rockfall in the Cromwell Gorge. It included a rock measuring about 1.2m in diameter and caused a brief delay to traffic around midday.

Farmers had had sufficient warning to move stock, he said. Snow forecast for the middle of this week could create further disruption, and people should stock up on essential supplies, if possible.