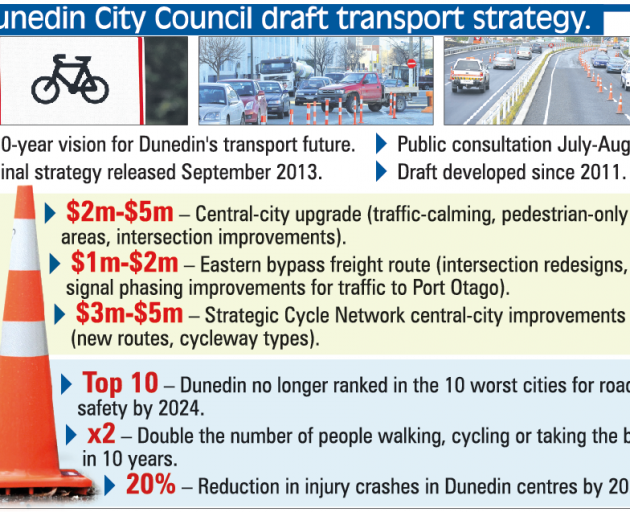 Council staff yesterday unveiled the draft transportation strategy that is to go before councillors next week, before being released for public consultation later in the month.

The strategy - which has already been two years in the making - outlined possible projects designed to tackle road safety and other transport issues in Dunedin over the next three decades.

Dunedin had the poorest road safety record of any major urban centre in New Zealand, based on New Zealand Transport Agency figures, and crashes since 2008 had an estimated total social cost of $581 million.

That meant road safety improvements were one of five key objectives set by the strategy, along with a 20% reduction in injury crashes and the removal of the city's name from the top-10 list of worst offenders, both by 2024.

Projects designed to reach those goals could include a central-city improvement plan, which could cost between $2 million and $5 million, the strategy said.

That could mean improvements to some problem intersections and streetscapes, or even the complete closure of some areas - such as the Octagon or George St - to vehicles, Ms Connolly said.

A new eastern freight bypass was also suggested, running from Strathallan St along the waterfront to Anzac Ave, costing $1 million to $2 million.

Heavy vehicles would pass through redesigned intersections with traffic signals tweaked to help them reach Port Otago more efficiently. Both projects, if approved, could be funded in part from within existing long-term council budgets, together with an NZTA subsidy.

Cycleways also featured prominently on the projects list, including plans - already under way - for a central city network costing up to $5 million, jointly funded by the council and the New Zealand Transport Agency.

All up, there were 22 projects pencilled in for the first 10 years to 2024, together costing at least $40 million.

Ms Connolly said the costings were indicative, and much of the council's share of any spending would come from existing long-term budgets, as well as NZTA subsidies and other organisations.

''There's very little new [funding], and we did that on purpose...we didn't want to come up with the Rolls-Royce implementation plan. We wanted to come up with something that was more realistic.''

Planned expenditure was also ''on the low side'' compared with Auckland and Wellington, but the focus in Dunedin was on safety ''because that's where our biggest problem is''.

''We're not performing as well as other urban centres. Sometimes, that might mean that you need to put a bit of money in, but the magnitude of that money depends on how you want to do it.''

The projects, and the likely total cost, would not be confirmed until after the public had their say, but the programme gave an early glimpse of what the council was thinking, she said.

Individual projects would then have to run the gauntlet of future budget hearings before they, and the required funding, were approved, she said.

''There's still quite a lot of water to go under the bridge before we can really answer those questions.''

Improved transport alternatives, such as buses, greater use of rail for freight transport, and a 10% reduction in Dunedin's fuel costs, were among the strategy's other goals.

Ms Connolly said, if the strategy was approved for release next week, she hoped the public would tell the council whether it was heading in the right direction.

''It's a starting point for a conversation, really.''