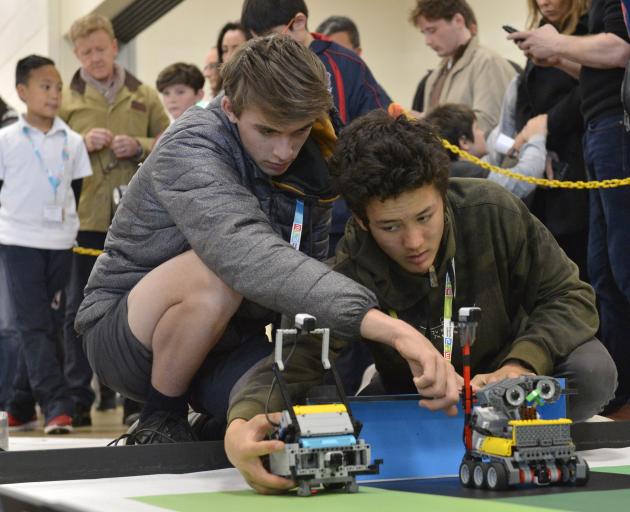 Queenstown Robo Stormers Club members and Wakatipu High School pupils Jasper Cusiel (left) and Cole Bramwell (both 15) battle for supremacy at the Robocup national finals in Dunedin on Saturday. PHOTO: GERARD O'BRIEN
Ramming opposition players up against walls, poking them with foreign objects, even driving over the top of them - it is behaviour that would likely see footballers sin-binned on a sports field.

But it was all part of the game at the Robocup national finals in Dunedin on Saturday.

Robocup New Zealand junior finals co-ordinator Bill Boyes said about 170 school pupils in 68 teams from across the country converged on the Dunedin City Baptist Church with their programmed robots to compete in football, theatre and search and rescue events.

"This is the biggest national event we've had in terms of the number of competitors."

He said about 20% of the teams in the national event were from the Otago region.

"That shows how good we are at it down here.

"Otago is very competitive and the competition is growing. Otago's had the strongest growth that we've ever had this year."

The event was also an opportunity for leaders in the technology, coding, electronics and engineering industry to connect with up-and-coming technicians.

In previous years, local companies had to find employees from overseas.

Now, local high achievers in the competition were being offered apprenticeships in local companies, which showed young people that robotics was a genuine career pathway.