Rocks trucked in to help in holding back tide 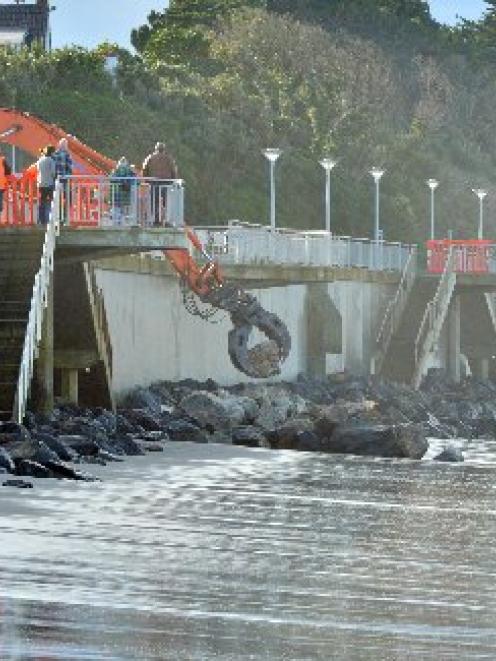 The contractors would be trucking the material to the Esplanade at St Clair, where it would be lowered on to the beach and positioned next to the sea wall using a mechanical excavator, he said.

The ramp had been blamed for creating turbulence in the water, but its removal had shown rocks positioned at the toe of the wall - to help protect against further sinkholes on the Esplanade above - had been washed away, Mr Standring said.

Sand covering the toe of the sea wall was down to about 1m in the area, ''which is getting to sort of dangerous levels''.

''Once it gets to the bottom of the toe, then everything starts leaking out from behind and we start getting the damage to the promenade.''

Work to replace the rocks, together with the removal of the ramp's remains last weekend, was expected to cost the council ''tens of thousands'' of dollars, although exact figures were not available yesterday, he said.

However, ongoing monitoring and maintenance work - likely to be required every six months - was expected to be ''par for the course for the foreseeable future'', Mr Standring said.

City councillors, deliberating on the council's 2014-15 annual plan last month, approved a new interim risk management plan, and a $95,000 budget, for the work over the coming year.

Mr Standring said the area was susceptible to the ebb and flow of tide and sand, but the council was trying to be proactive.

''Rather than just accepting that's how things go, we are actually trying to take some sort of action as well, just to shore things up as these things happen.''