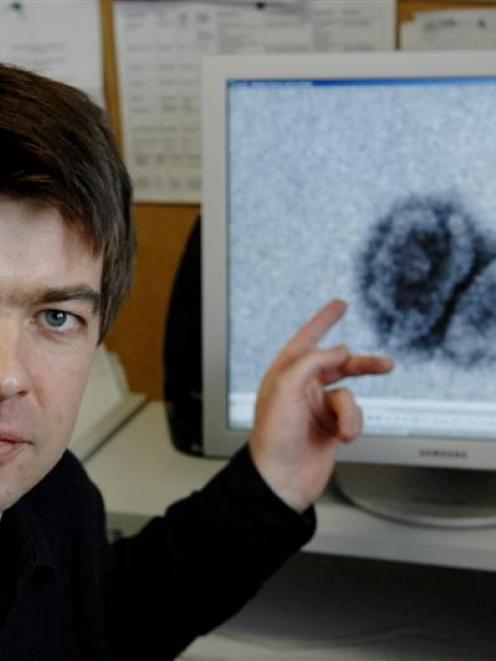 University of Otago scientist Dr Alexander McLellan points to images -- magnified a million-fold -- showing two lipid particles which are involved in recycling antibodies that boost the immune response. Photo: Linda Robertson.
A Discovery by University of Otago scientists of a previously unknown role for antibodies in enhancing the body's immune response could pave the way for improved vaccines.

The highly soluble blood proteins are well known as essential weapons in fighting pathogens such as bacteria, fungi and viruses by binding to and destroying the invaders.

One of the scientists, Dr Alexander McLellan, said that Otago University researchers had also been surprised to discover that antibodies, the immune system's front-line fighters, also played an unexpected role in setting off the body's immune response.

In a ground-breaking discovery, researchers from the university's Dunedin and Christchurch campuses have shown that antibodies are also recycled in a lipid particle form to enhance the immune response when infection first strikes.

Sarah Saunderson, now a doctoral student in the Otago microbiology and immunology department, contributed significantly to the research.

"We were aware of the classic function of antibodies, whichis to directly destroy pathogens," Dr McLellan said.

"They also act to pass pathogen fragments on to other immune cells, to amplify the immune response,"he said.

The study has just appeared in the prestigious international Journal of Immunology.

"We're very excited to make this contribution," he said.

Dr McLellan, who is a senior lecturer in the university department, said the improved understanding of the immune system provided by the research could lead to further improvements in vaccine design.

Any new vaccine could take five to 10 years to develop.

A major outstanding problem in immunology was how small amounts of infectious material could trigger strong immune responses at the start of an infection, he said.

The antibodies then circulate around the body to provide long-lasting protection in the blood and solid organs.

Dr McLellan's research group has now shown that B cells use antibodies to pull in tiny fragments of pathogens bound to the cell's surface.

They then recycle these to amplify the immune response.

"We believe our discovery of this recycling mechanism goes some way to explain why the immune system is an incredibly powerful bio-sensor, able to detect nanograms of pathogen material," he said.

•The research was supported by a Marsden Fast Start Grant, Lotteries Health, the Bendigo Trust, the H.S. and J.C. Anderson Trust and a Senior Smeaton Scholarship for Experimental Science.