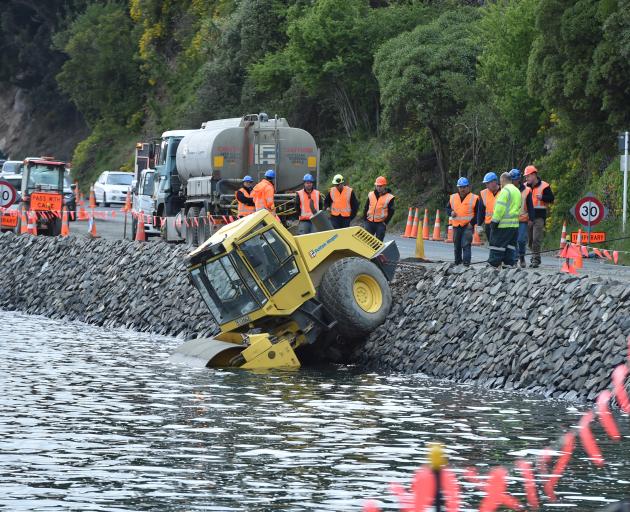 Fulton Hogan staff contemplate their next move after a roller ended up in Otago Harbour near the Cove, late yesterday afternoon. PHOTO: GREGOR RICHARDSON
An incident in which a Fulton Hogan roller crashed off Portobello Rd and into Otago Harbour has prompted a wider investigation of the company's performance, the Dunedin City Council says.

The front roller of the machine went over the edge and slipped down the seawall, coming to rest in the water, Mr Drew said.

The driver, who was not hurt, was able to release himself from his harness and climb out, Mr Drew said.

There was no leak of diesel or hydraulic fluid into the harbour, and the driver himself was an experienced operator who passed drug and alcohol tests immediately after the incident, Mr Drew said.

However, the incident led to a stop-work meeting at the site yesterday morning, followed by a meeting between Mr Drew and senior managers from Fulton Hogan later in the afternoon.

The company had already initiated a detailed investigation into the incident, but agreed to a request from Mr Drew to widen it to include two previous incidents involving Fulton Hogan vehicles at the same work site, he said.

The first accident happened when a truck rolled down a bank - landing on its roof - while working near the Cove on July 16, forcing a three-day closure of the site.

The second incident happened on July 25, when another Fulton Hogan vehicle also rolled, prompting a second closure until the site reopened on July 30.

Neither accident resulted in injury, but investigations in both cases blamed plant positioned too close to edges, causing collapses and the vehicles to roll, council staff said at the time.

The company had already made changes to its methodology as a result of investigations into the earlier incidents, but Mr Drew said he wanted to ensure every effort was being made to avoid a repeat any the risk of serious injury.

The incident also highlighted the need for the project, given the tight space constraints the company was working within while widening the road, he said.

"They are trying to keep traffic flowing and minimise disruption and inconvenience to residents in a very tight, constrained space."