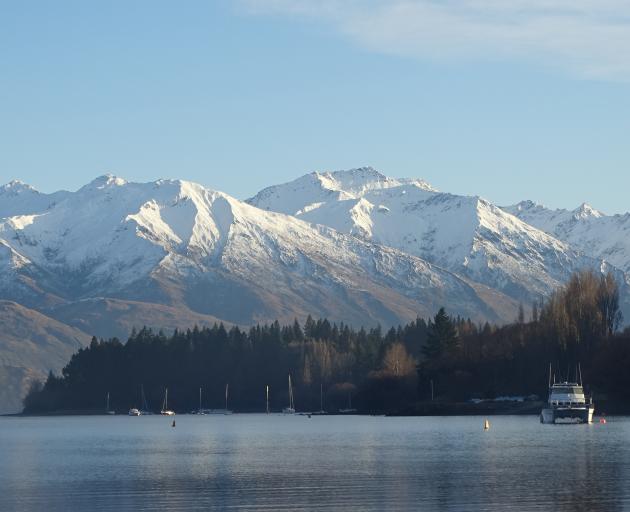 Morning sun hits Eely Point - a popular, sheltered boating and picnicking area near Wanaka on a cold, frosty morning today. Photo: Kerre Waterworth
It may pay to put an extra blanket on your bed tonight. MetService has forecast snow down to 500m overnight in Otago and Southland, including flurries in coastal areas such as Dunedin and Oamaru.

A spokesman said Tuesday afternoon’s showers would develop in the evening, with snow lowering to 700 metres and southwesterlies becoming strong in exposed places.

From midnight onwards, there would be scattered showers and snow would possibly lower to 500 metres, he said.

The risk of snow amounts reaching warning criteria anywhere was minimal at this stage, but some higher roads and farms may be affected.

Snow showers have been forecast for alpine roads over the next day as well as the Crown Range, linking Queenstown and Wanaka. From 2pm to 6pm on Tuesday, 2cm of snow may settle near the summit of the road, with lesser amounts to 800 metres.

In the North Island, heavy snow is expected to fall on the Desert Road (SH1)  and around Taihape from Wednesday.

❄Snow for both islands❄
Cold air sweeping over the country has unlocked the potential for snow to impact alpine passes as far north as the Desert Road over the coming days. Road Snowfall Warnings and a Heavy Snow Watch are in place, more details https://t.co/qHyE5zhh6X ^Lewis pic.twitter.com/rQSyZjngnt

Meanwhile, drivers are warned to take extreme care on icy roads. A spokeswoman for the Central Otago District Council said Alexandra was "especially bad" this morning.

Auripo Rd is restricted to 4WD due to flooding.

In the Queenstown Lakes area, there's lots of ice and grit about and road users should take care particularly over the Crown Range, through the Cardrona Valley and the Kawarau Gorge.

Many of the roads in the district were wet again and temperatures low, meaning a high chance of ice/black ice.

The Queenstown Lakes District Council tweeted mid-morning that black ice was forming on Malaghans Rd. It's pretty frosty in Wanaka also, with road warnings in place.

Remember to drive to the winter conditions and reduce speeds accordingly.


Porters Pass (SH73)
Snow showers are expected from Tuesday evening to Wednesday morning. From 9pm Tuesday to 9am Wednesday, 4cm to 8cm of snow may settle near the summit of the road, with lesser amounts to 600 metres.

Lewis Pass (SH7)
Some snow showers are expected to affect the road from Tuesday evening through Wednesday. Up 4cm of snow may settle above about 400 metres, mainly east of the summit.

Arthur's Pass (SH73)
Snow showers are likely from Tuesday evening to Wednesday morning. From 9pm Tuesday to 9am Wednesday, 1cm to 2cm of snow may settle near the summit of the road, with lesser amounts to 600 metres.

Lindis Pass (SH8)
Snow showers are expected during Tuesday afternoon. From 2pm to 6pm, 1cm or less of snow may settle on the road above 800 metres.

One dead after crash near quarry