Rush for thousands of red roses once again 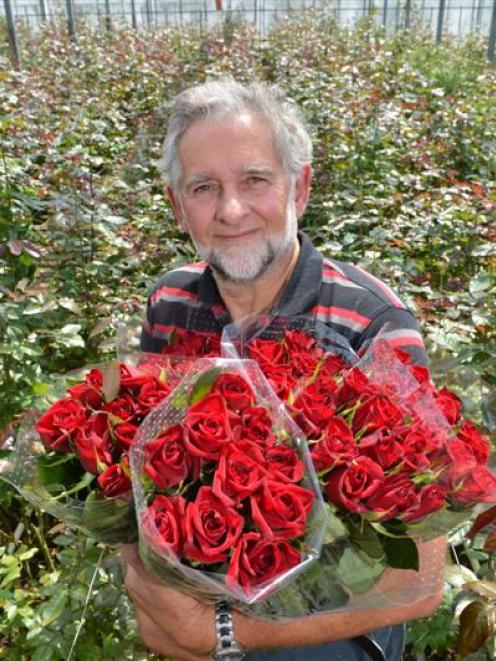 Commercial rose grower John van Delft, of Mosgiel, displays bunches of his signature rose, Black Magic, before sending them to the Dunedin flower market in time for for Valentine's Day. Photo by Peter McIntosh.
Black Magic is in demand, as sweethearts prepare to cast spells over loved ones this Valentine's Day.

Mosgiel grower John van Delft has bunched the last of his signature Black Magic rose stems, filling orders by florists and businesses Otago-wide in time for the big day tomorrow. He began cutting stems from his 100,000 roses last week, and has been supplying retailers through Dunedin's daily flower market.

Mr van Delft, who also owns and operates two florist shops with his wife Mary, said Valentine's Day was over before it began for those in the flower industry.

''It's pretty much over as far as we're concerned. All the Valentine's Day orders have gone out, because the florists need time to get them ready.''

He started preparing Valentine's Day roses at Christmas, but said the lack of warmth and sunshine since then had delayed their growth.

Although roses were grown inside greenhouses, no amount of artificial heat could compensate for the absence of sunshine.

''We would have had more roses to sell if they had come on earlier. The colder weather has delayed them by up to two weeks.''

Cutting stems started last week, to be bunched and chilled before being sent to the flower market.

Because they were grown locally and delivered while still fresh, they should last up to two weeks, Mr van Delft said.

The main grower south of Christchurch, he said the market was increasingly being supplied by roses from India.

Flower Growers Association chairman David Blewden said only about half the 600,000 rose stems bought nationwide for Valentine's Day were grown in New Zealand, with the rest imported from India.

''Import volumes are growing each year because stems are mass-produced overseas very cheaply, putting our local industry under severe pressure. Unfortunately, consumers don't know that most of the roses they buy are imports,'' he said.

About 12 million rose stems are grown commercially in New Zealand each year, with about 3 million imported.