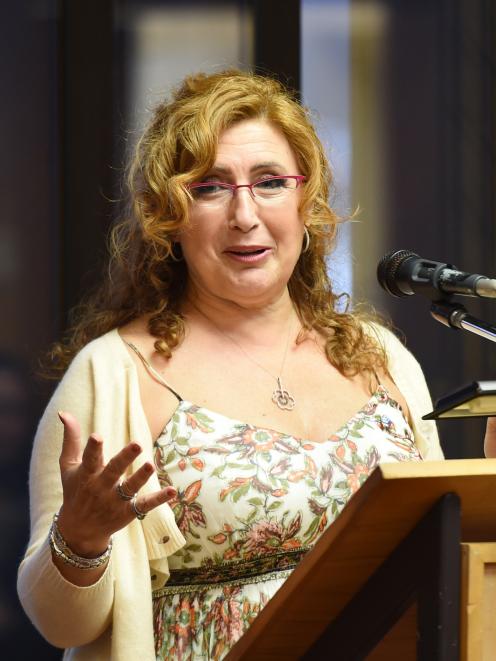 International best-selling author Paullina Simons speaks to fans at the Dunedin Public Library last night. Photo: Gregor Richardson
When it comes to settings for romance novels, Invercargill does not immediately spring to mind.

But if anyone could make the southern city sound wild and steamy, it would be international bestselling author Paullina Simons.

The Russian-born American writer of Tully, Red Leaves, Eleven Hours and The Bronze Horseman was at the Dunedin Public Library last night to talk about her latest series of books - a trilogy called The End of Forever.

In a departure from traditional publishing, the trilogy is being released in quick succession - within six months - so fans do not have to wait with bated breath for the closure her books demand.

A Beggar's Kingdom is set in Invercargill, much to the surprise of locals.

The novel follows a man who, despite grave danger and impossible odds, is determined to save the woman he loves.

''I imagined a man, who is not from Invercargill, walking through its flat lands into the town, and the town people being very perturbed, troubled and distressed by his arrival.''

When asked if she thought the book would make the city a tourist attraction for those who did not know the city, she said ''probably not'', because the book was not set in the present.

''I think everyone's going to want to go and stand on the bluffs and to take one of those whale ships out south,'' she joked.

As for what happens to the lovers in the third and final book, she kept the cards close to her chest.

About 50 people attended her talk, the last event of her two-week tour of New Zealand.