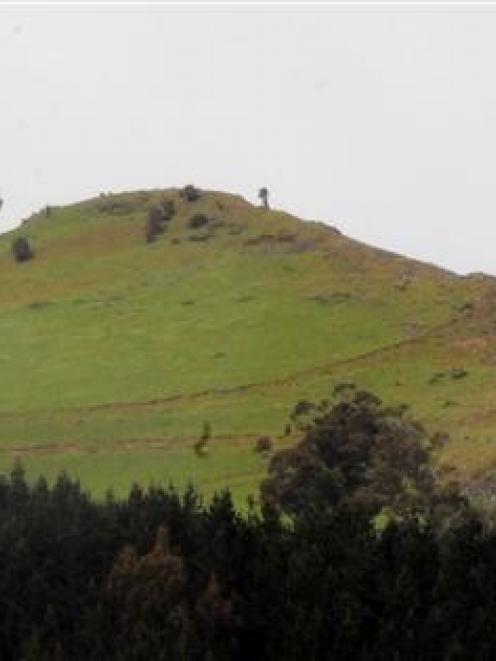 Saddle Hill. Photo by ODT.
The Dunedin City Council has been warned that if it grants consent for more residential development on the lower and middle slopes of Saddle Hill, the rest of the hill will soon follow.

But the consulting planner for developers planning two new subdivisions on the hill has told the council's hearings committee he is not sure people care that much about it.

Developers seek to create - above and in between existing subdivisions - 12 new sections around the hill to the east of State Highway 1 at East Taieri. There is consent already for four dwellings on the site.

Council planners have recommended only two of the new sections be approved, because allowing the rest would significantly change a rural area.

The land was once part of a 250ha farm that over time has been divided into smaller lots, with these latest applications seeking to split four rural 15ha lots into 16 smaller lots, most about 1.5ha to 2ha in size.

Last week, the council's hearings committee considered evidence from Allan Cubitt, the planner for the three applicants (Blue Grass Ltd, KJ Taylor and Saddle Views Estate), a landscape architect, a consultant engineer for the council on geotechnical issues, and several submitters opposed to the application.

Council planner Lianne Darby has advised the committee to grant consent to subdivide one of the lots at 103 Riccarton Rd, as the changes would have only a minimal effect, but decline consent for the rest.

She said the developers were effectively trying to achieve a de facto zone change, from rural to rural-residential, when it should be subject to the plan change process.

If consent was allowed, a precedent would be set that could apply to eight more sites in the area, all of which could use the same argument for subdivision and development.

''The consequence of this would be a major change to the visual appearance and character of Saddle Hill.''

She said such a change was not supported by the council's strategic direction for Dunedin's development over the next 30 years.

Mr Cubitt, however, said the council's strategic plan carried no weight in the resource management process.

He said the applicants had not applied for a plan change because the proposed housing density reflected the existing character of the area, which could be defined as a ''transitional zone'', where urban met rural.

The applications also included a suite of mitigation measures, such as screening, height and colour restrictions, that would address concerns related to zoning restrictions.

He also observed the area was not identified for future development in the city's spatial plan and wondered if that was because of the ''supposed'' visibility of the area from the surrounding environment.

But no submissions on the subdivisions were received from Mosgiel or Taieri Plain residents.

''I would suggest that they expect this type of development in this location and are not overly concerned about it, if they ever were ... the lower/mid slopes of Saddle Hill do not appear to have a great deal of significance to residents in the area.

''I suspect the general public realise Dunedin is a hilly place so to restrict elevated building options within the city just because someone may see it, isn't valid or appropriate.''

Fifteen submissions were received, including from the Otago Regional Council, which was opposed because the site and adjoining land had a documented history of landslips and land instability.

It was a relief, Mr Cubitt said, that the city council's consultant engineer had since agreed the applications need not be declined on the basis of natural hazards, and instead recommended consent conditions be included to address potential geotechnical issues. Emma Brown and David Stewart, whose properties border the proposed subdivisions, told the committee they were concerned about the significant visual effects of the properties.

Mr Stewart said hundreds of sections were being developed around Mosgiel already, and these new sites were simply not needed.

He was also concerned about the precedent, and, having 30 years' experience in the field as well as being familiar with the soil on site, said he believed there was not enough geotechnical information to make a decision.

At the conclusion of the hearing, Mrs Darby said she had not changed her mind.

''The main issue is not necessarily the effects. I accept it may result in a high quality rural residential development, possibly like at Tirohanga, but that was not a rural zone. If we are going to throw the rules out, we need to have a very good reason.''

If the application was granted, she said she would expect ''the rest of Saddle Hill will follow in very close order''.

''If we are going to look at subdivision in this area, we need to look at the whole hillside and do it in a plan change process ... we are looking at rural zone there. There shouldn't be housing there.''