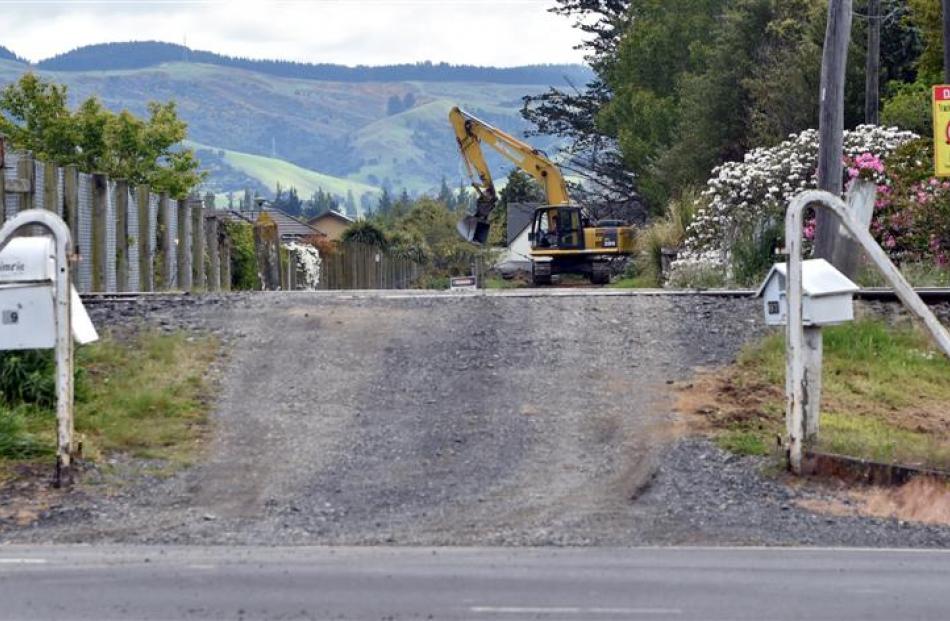 Safety fears are being played down as work begins on one of the largest pieces of undeveloped residential land in Mosgiel.

Contractors and their heavy machinery have moved in to begin work on the 82-lot Owhiro Park subdivision, on a 7.5ha site between Gladstone Rd North and Hagart Alexander Dr.

The work has already prompted safety concerns, as trucks negotiate a raised gravel mound over the main trunk railway line from Gladstone Rd North to reach the site.

One neighbour, who would not be named, contacted the Otago Daily Times yesterday to say he feared heavy vehicles could get stuck while negotiating the crossing over the railway line.

''This is a very busy [railway] track ... I think there could be a serious accident at this crossing.

''Imagine a truck with a load of ready-mixed concrete getting stuck,'' he said.

The subdivision's consent required a new road and culvert to be built from Hagart Alexander Dr, over the Owhiro Stream, to reach the site.

The developer appeared to be ''shortcutting it'' by bringing heavy machinery in from the other side of the site, the neighbour said.

The subdivision was being developed by former Dunedin accountant Murray Frost, of Minaret Resources Ltd, who lives in Wanaka.

He said the temporary site access was ''very poor'' and ''certainly undesirable'', but not dangerous, and contractors working on site were in close contact with KiwiRail.

''We have had quite detailed discussion with KiwiRail and have their permission on board to make sure we undertake those crossings in a controlled and safe manner.

''There's no hazard and KiwiRail are quite happy with what we're doing.''

Despite that, the approaches to the temporary access would be further improved to provide a flatter approach to the ''quite steep little bump over the railway line'', he said.

It would continue to be used until the permanent new entrance from Hagart Alexander Dr was ready in February next year, he said.

A ''timing'' issue meant the new entrance and concrete culvert could not be built straight away, and the developers wanted to make the most of the summer months, he said.

''We are putting it in as quickly as we can ... but it's still going to take several months to get to that point, and in the meantime we want to be continuing with our earthworks.''

Dunedin City Council resource consents manager Alan Worthington said vehicle access to the site crossing railway land was a matter for KiwiRail and ''nothing to do with the council''.

A KiwiRail spokeswoman said the private crossing was permitted.

Safety signs were required and its condition monitored to ensure safety.

It would be closed as soon as permanent site access from Hagart Alexander Dr was ready.

''There is currently one freight service a day on that section of the Main South Line but we remind drivers to always take care and be prepared to stop at a level crossing.''

Mr Bowen said earthworks for stage one of the development were expected to be completed by March, and roading and drainage by December next year, after which sections would be up for sale.

The entire project was expected to be completed within four years.

• Stage one (earthworks, roading and drainage) due for completion by December 2016.