What would happen if you had a Dunedin salmon fishing competition and no-one caught a salmon?

One person caught a 10cm-long salmon on Saturday but it had to be returned to the harbour, he said.

There had been one other time in the annual competition’s history, about eight years ago, when no-one caught a salmon.

Before he joined the committee about three years ago, he had entered the competition for about 15 years and never caught a salmon, but a day without catching anything was definitely not a day wasted, he said. 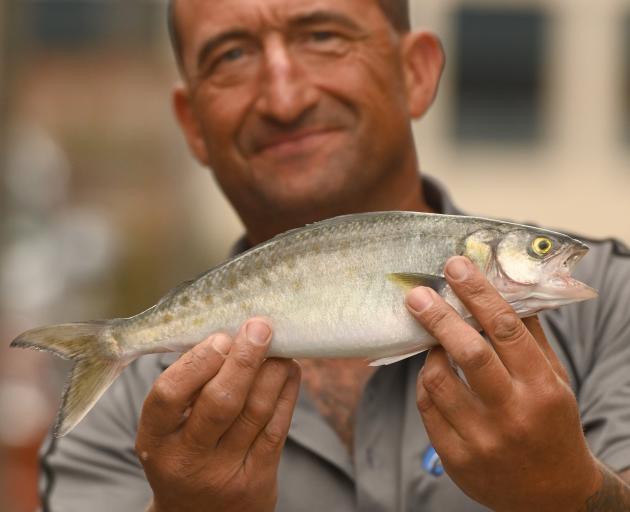 Dave Taylor, of Dunedin, was embarrassed by the size of his 0.68kg kahawai which won the prize for the heaviest kahawai at the Otago Salmon Anglers’ Association fishing competition at the weekend.
It was a lot of fun talking to friends on the wharf or in various spots around the harbour, and was a relaxing way to spend the day.

"You have a bit of a laugh, just catch up with people, share stories as well."

"It gets rid of that stress," he said.

In the competition, there were also prizes for the heaviest kingfish and kahawai.

Unfortunately, no kingfish were caught either.

But several kahawai were caught — the heaviest being a "pitiful and embarrassing" 0.68kg kahawai, caught by Dave Taylor, who was not impressed by his haul.

"The fishing is not quite as good as we’d probably like because salmon like colder water. It’s just a bit warmer than normal.

"Kingfish like warmer water, and there was quite a big one caught on Saturday, but the person who caught it wasn’t competing in the competition.

"At the end of the day, kingfish don’t usually come down this far and they aren’t as prolific down here. So it’s harder to catch them."

Mr Cameron said because there were no salmon or kingfish caught, the prizes went into a hat and were drawn at random.