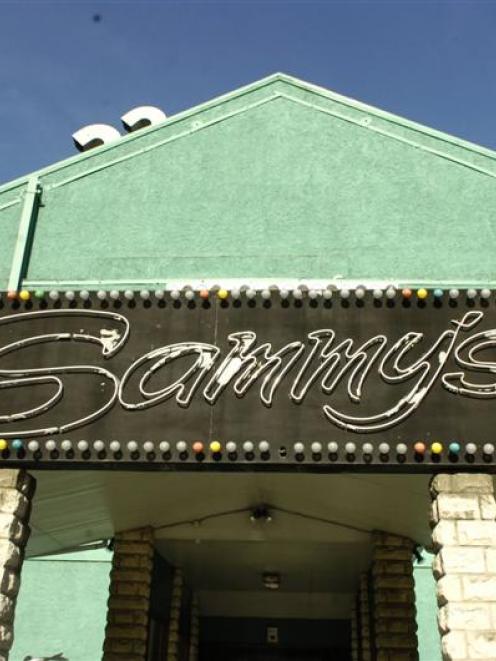 Sammy's ruled out as ball after-party venue. Photo by Jane Dawber.
More than 1000 high-school pupils in Dunedin will be looking for somewhere else to party, after a police crackdown targeting after-ball events at licensed premises.

Dunedin nightspot Sammy's had been preparing to host three after-ball events in the next two months, each attracting up to 400 senior high-school pupils and their partners, beginning with a King's High School event this month.

The events were to be organised by pupils and hosted at the licensed nightspot. Bar staff were to help parents supervise and provide security.

Alcohol was to be provided to those under the legal drinking age - up to six beers or four pre-mixed RTDs a pupil - but only to those whose parents provided written consent.

Parents would also deliver their children's alcohol, numbered and matched to individual pupils, the day before. This would be stored behind the bar for distribution by supervising parents.

However, Sammy's managing director Sam Carroll yesterday said a change of heart by the Dunedin City Council, Public Health South and police meant the events would not proceed.

The nightspot had hosted up to 10 similar events in the past two years with few problems, but Mr Carroll had this month received from the council's liquor licensing staff a written warning of a $2000 fine if this year's events occurred.

He has also received an email from Dunedin police, warning they did not support the event.

Mr Carroll said the stance was "crazy" and could encourage pupils to look for other, unsupervised venues.

The death of 16-year-old schoolboy James Webster, who died after drinking a bottle of vodka outside a party last weekend, was an example of what could go wrong, he said.

"It just seems to me pretty ridiculous, because of what may end up happening as a result if they aren't anywhere that can be managed. We don't allow kids to go out to their car and get loaded on booze," he said.

The crackdown comes after the Law Commission last month released a 500-page report aimed at curbing alcohol harm, and after the Dunedin City Council unveiled its own set of sweeping changes in a draft alcohol plan released last year.

It also comes after a ruling by the Liquor Licensing Authority in late 2008, which found a similar event at licensed premises in Invercargill had breached the Sale of Liquor Act.

Dunedin City Council liquor licensing and projects officer Kevin Mechen said the LLA's ruling had created a precedent that changed the stance of authorities in Dunedin and elsewhere in New Zealand.

Dunedin police would no longer support an event featuring underage drinking, and the council could not continue to do so without the support of the police and Public Health South, he said.

The organisations had previously worked in partnership to support some appropriately organised after-ball events, which received some funding for food and transport, he said.

The council's liquor licensing team was also required to comply with LLA rulings and was audited to ensure it did so.

Sammy's was the first case to be scrutinised in Dunedin since the LLA ruling, but other similar events could come under the same scrutiny, regardless of the venue, he said.

However, Mr Mechen said he could "totally sympathise" with Mr Carroll's concerns. Similar events in Dunedin in at least the past decade had worked well, and problems had been "few and far between", he said.

"Those that are organised properly seem to do a good job."

However, he understood the King's High School event planned for Sammy's was to be staged one week after the school's ball.

Mr Carroll could not confirm that yesterday, but said most after-ball events had been held on the same night, unless the venue was already booked.

"It's just not appropriate to be supporting underage drinking when it's against the law. The police role is to uphold the law."