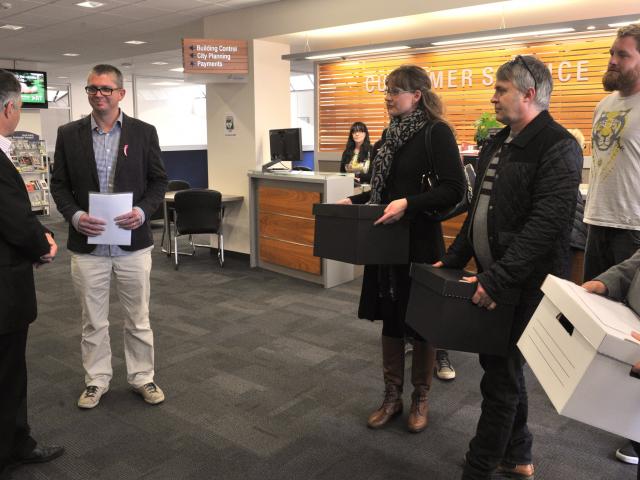 Plans to bring forward the 4am closing time of Dunedin bars have sparked the highest number of submissions to the Dunedin City Council for any issue in years.

The Dunedin City Council has a fight on its hands over proposed changes to the city's alcohol laws, with more than 4000 supporting a campaign opposing them.

A Dunedin bar's plans to screen Fifa World Cup matches later this year could be derailed by concerns the venue could attract early-morning drinkers ''like moths to the flame''.

Super Liquor stores in Dunedin and Mosgiel were temporarily closed recently by the Liquor Licensing Authority after staff sold alcohol to a 16-year-old girl.

A last-minute change in Parliament will have the Alcohol Reform Bill put through its third and final reading next month, bringing forward likely requirements for Dunedin bar owners to pay higher fees.
Three Invercargill premises operated by the local licensing trust sold alcohol to a 16-year-old boy during part of a controlled-purchase operation on Friday night.

The Government's proposed Alcohol Reform Bill was "very much stronger" than current legislation and could make life "quite uncertain" for licensees, former Liquor Licensing Authority Judge Bill Unwin said in Queenstown yesterday.
A Cromwell restaurant owner last year convicted of indecently assaulting two former employees and offering to supply cannabis to a person under the age of 18 at one of his restaurants will lose his liquor licence and his ability to enter his restaurants during business hours.

The Liquor Licensing Authority decided not to suspend an off-licence for the Clutha Licensing Trust at a hearing in Balclutha yesterday.

A Dunedin bar owner has criticised the police over what he says is bias and a lack of consistency in punishing licensees for selling alcohol to minors.

Seven Dunedin and Mosgiel liquor licences or business operations were suspended this year after employees sold alcohol to people as young as 15 in a series of undercover police stings.

Two recent rulings by the Liquor Licensing Authority identify where the body thinks the contentious boundary between personal responsibility ends and host responsibility starts as it relates to the hospitality industry.
Alexandra's Criterion Club Hotel's liquor licence has been suspended for 48 hours and general managers Corranne and Tony Flannery have had their managers' certificates suspended.

A Dunedin bar that has applied for a special licence to hold a fundraiser for Christchurch earthquake victims between midnight and 3am on Easter Sunday has contrived the event so the bar can trade on a sacrosanct day, police say.
The Dunedin District Licensing Agency hearings committee is to determine whether a temporary authority will be issued to a central city bar that wishes to continue to stay open to 5am four days a week.

Seven of the eight inner city bars seeking to stay open into Christmas Day will be allowed to trade until 1.30am.

Inner city Dunedin bars are set to find out today if they can open until 3am on Christmas Day, a matter police have opposed for the first time.

More than 1000 high-school pupils in Dunedin will be looking for somewhere else to party, after a police crackdown targeting after-ball events at licensed premises.