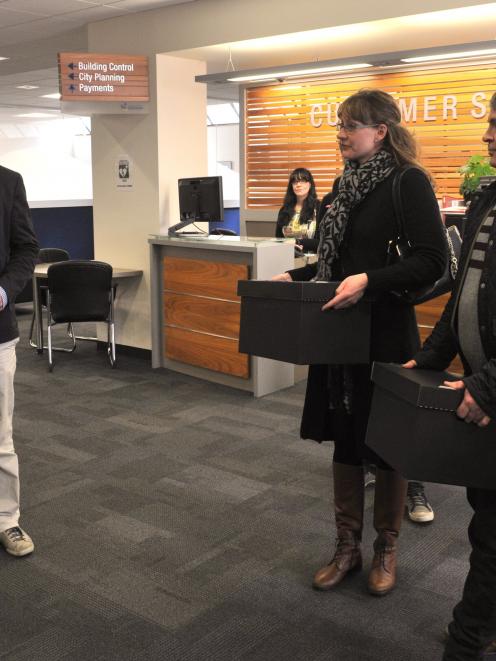 ubmissions to DCC re the draft local alcohol policy - Friday 101014 (from left) Dunedin mayor Dave Cull receives submissions from Richard Newcombe, Claire Grenfell, Jon Devereux, Jamie Hughes and Baffin Wong. Photo by Linda Robertson
Plans to bring forward the 4am closing time of Dunedin bars have sparked the highest number of submissions to the Dunedin City Council for any issue in years.

More than 4000 submissions on the council's draft local alcohol plan (Lap) were received by the deadline yesterday, prompting Dunedin Mayor Dave Cull to praise the response as ''democracy in action''.

The draft policy proposes a one-hour cutback to 3am, licensing public footpath space outside bars until 11pm and a one-way door policy from 1am.

Another 3500 submissions from a group of Dunedin bar owners were delivered in the afternoon.

Members of the city's bar industry, which has said the changes could force bars to close, ran a campaign to gather submissions and more than 2000 were collected in an online survey.

The group, which had so far spent more than $15,000, was overwhelmed by the response, spokesman Richard Newcombe said.

''[People] understand that not only does closing bars down reduce the viability of the night-time economy of Dunedin, but that it also pushes drinking into unsafe environments.''

The vast majority of the submissions the group gathered did not support earlier closing and were also concerned about restrictions on outdoor areas.

He looked forward to putting evidence before the council and having a good ''dialogue with them and the community'' on the issues, Mr Newcombe said.

Mr Cull said the council had encouraged people to make submissions, so he was ''absolutely delighted'' with the response.

The fact that saving late-night drinking was the issue that got so many people to participate in the democratic process just showed what a ''jovial place Dunedin can be'', he said.

The feedback would help the council a great deal, because it wanted a policy the whole community would buy into, he said.

Mr Mechen said a brief perusal of submissions showed most appeared to oppose the plan.

''I look forward to reading their alternative suggestions for reducing alcohol-related harm.''

The level of response was ''not at all'' unexpected, given what had happened in other cities when councils had consulted on draft LAPs.

A hearings subcommittee of Mr Cull and Crs Jinty MacTavish, Aaron Hawkins, Mike Lord, Neville Peat, Lee Vandervis and Andrew Whiley will hear public submissions next month, although a timeframe will not be set until it is known how many submitters wish to speak.

Mr Newcombe said several hundred people had indicated they wanted to speak to their submissions.

The Auckland Council received more than 2500 written submissions on its draft LAP and 400 submitters made presentations during a nine-day hearing.

The DCC received hundreds of submissions at each stage of the process towards the building of Forsyth Barr Stadium and, in recent years, the council's annual plan process has generated up to 1000 submissions each year.