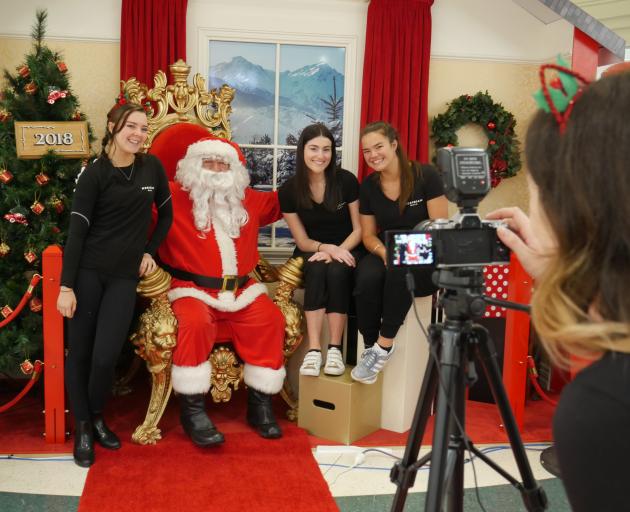 Santa and his helpers (from left) Emma Stokes, Paris Rolton and Hannah Hedges smile for the camera, as Julia Strachan captures the moment. PHOTO: JESSICA WILSON
It may be his busiest time of the year, but Santa is making time to meet Dunedin children before Christmas.

Santa, talking to The Star at one of his Dunedin stopovers this week, had been visiting the Meridian Mall for photos with residents since the start of the month.

Each year he smiles for photos with children, teenagers, graduates, parents and grandparents and, while it had been a slow start, he expected numbers to increase closer to the big day.

Most children were excited to meet him, others were a bit "wary'', but he tried to cheer them up by singing Christmas songs, ringing his bell, or letting out his famous "ho, ho, ho''.

"It's nice to be introduced as Santa rather than the fat man sitting on the throne.''

Santa said his favourite food was chicken and chips, but the best thing to leave out for him on Christmas Eve was a glass of milk and a cookie.

"And definitely a carrot for Rudolph. We need lots of energy.''

Christmas was a time for giving and spending time with family, he said.