Scepticism mixed with humour in address 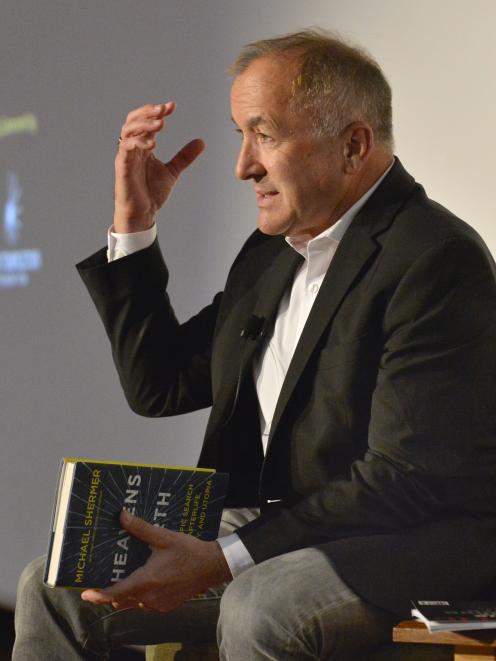 Writer Michael Shermer makes a point while talking to about 70 people at the University of Otago yesterday. PHOTO: GERARD O'BRIEN
A Dunedin audience was treated to a healthy dose of scepticism yesterday.

Best-selling US science writer Dr Michael Shermer blended almost equal portions of humour and scepticism into a lively closing address at a Dunedin conference on "Science and the Afterlife".

The two-day ScienceTeller event was co-directed by University of Otago Associate Prof Jesse Bering and Prof Jamin Halberstadt, of the Otago psychology department.

After Dr Shermer (64) had taken a robustly sceptical view of the afterlife, Prof Bering, who directs the Otago Science Communication Centre, asked him what wording he would like to see on his own gravestone.

"I'll be back!" Dr Shermer replied with a smile.

His other suggestion was about someone who "wanted to know" what was true. His talk, to more than 70 people at the university College of Education Auditorium, was titled "Michael Shermer's Scientific Search for the Afterlife, Immortality and Utopia".

A currently more popular view was that of "mind-uploaders", who believed all of a person's vital data, including memories and perhaps genetic information, could eventually be "uploaded to the cloud" and stored forever.

Dr Shermer said the "really scary large" amount of information required was impossible to be gathered and stored.

Other limitations also meant the unique features of each person could not be captured in this way.

He took a more practical view of immortality, and favoured living well for a good lifespan.

During a vibrant question and answer session, he took issue with reported sightings of ghosts in English castles, and said "they never go to 7-Eleven" convenience stores.

Old buildings tended to creak and move about a great deal, and imperfections in older generations of video cameras tended to generate some ghost-like images at times, he said.

Dr Shermer founded The Skeptics Society, and is editor-in-chief of its magazine Skeptic.

Conference co-directors Prof Bering and Prof Jamin Halberstadt, of the Otago psychology department, said the gathering had gone well, and had featured its strongest overall line-up over overseas speakers.