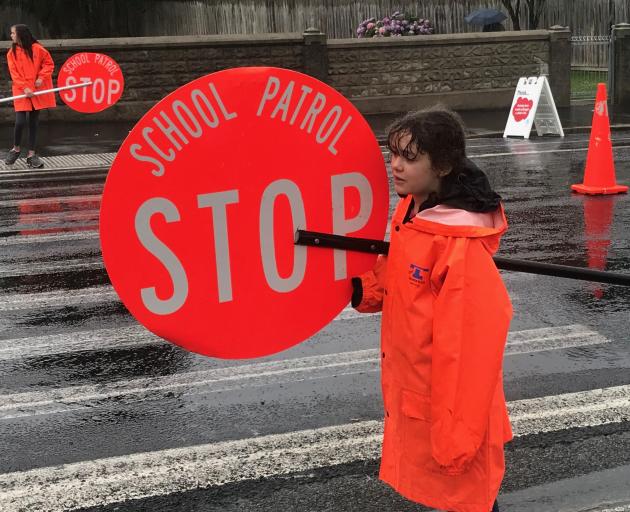 ‘‘Parking here could endanger a child’s life. Think . . .’’ say the signs, put on the North Rd pavement before and after school.

Since he was appointed in 2007, he had noted a big increase in traffic along North Rd and has had several concerns about it.

“People think when there are no signs [or school patrols] at the school crossing, they don’t have to stop,” Mr McKenzie said.

“The local community constable makes a point of viewing the crossing at regular intervals, and so do the highway patrol cars.”

The cycle lanes meant the presence of more cyclists and with the school being between the gardens and Baldwin St, the volume of tourist traffic — including camper vans — past its gates had also grown, he said.

Mr McKenzie had concerns about people parking over pavements and about buses parking outside the cafe on the corner of North Rd and Calder Ave. This had been a bus stop, which was moved after representations from local residents, who were concerned that buses blocked visibility for motorists using Calder Ave and the school’s rear entrance.

The bus stop became a car park, but buses were using it and the problem was back.

Congestion in the gardens area was also an issue, he said.

“My son counted 44 cars in the queue [at the lights] the other day.

“It would be great if there was some sort of bypass at the gardens,” he said.

Which all paints a convenient picture of the trip across the zebra crossing to school as being fraught with danger, except ... we all know the greatest danger around schools is parents collecting and dropping off children (even if it's unacceptable to say so), the cycle lanes HAVEN'T meant more cyclists, and the gardens intersection is a long distance from North East Valley Normal school (certainly more than 44 cars away).

(However, a bypass sounds a great idea!)