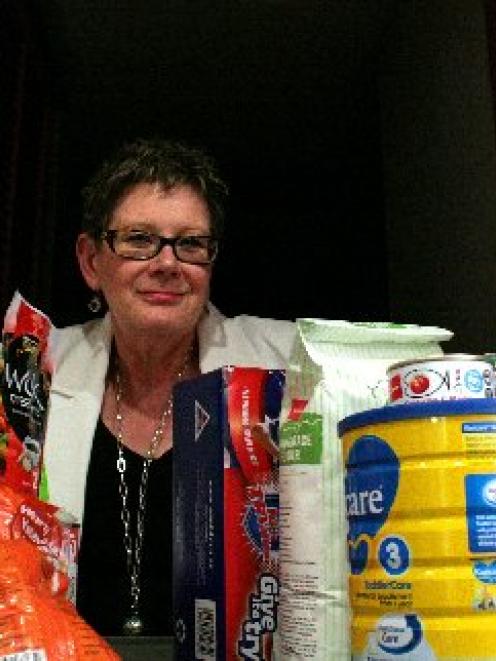 Presbyterian Support development director Lisa Wells (above) says demand for food bank parcels is up dramatically on last year. Photo by Dan Hutchinson.
Social agencies are hoping for a white Christmas - flour that is - with demand for basic food items at an all time high in Dunedin. The Star reporters Jonathan Chilton-Towle and Dan Hutchinson look at the ever-increasing demand on local food banks and what is being done to feed the masses.

Tonnes of food are being brought to Dunedin, some from as far away as Hawkes Bay, as local social agencies scramble to fill a massive demand.

One of Dunedin's largest food banks, run by Presbyterian Support, is giving food away at a rate of up to 100 parcels a week and development director Lisa Wells calculated demand was up 22% on last year.

''We have had year-on-year increases for at least the last 10 years.''

Other food banks have had to put extra criteria in place - Anglican Family Care director Nicola Taylor said in the past few years her organisation had limited food parcels to people with children.

Salvation Army community ministries manager Lindsay Andrews said the food bank had given out 850 more food packages in 2013 than it had in 2012.

He said there had been a 31% increase in demand for food packages and a 51% increase in families accessing the service, in the first quarter of 2013.

''There are a number of waged families in the mix, which is concerning because it shows families aren't coping,'' Mr Andrews said.

Mrs Wells had also noticed an increase in non-beneficiary families who were finding it tough because of a reduction in their hours of work, or loss of part-time work by one parent.

Founder and chief executive of FoodShare Deborah Manning said they were sourcing bulk lots of good food that was either near its expiry date or was surplus to requirements.

She said the organisation sometimes supplied a tonne of food a day which went directly to food banks for redistribution.

It regularly received one-tonne lots of apples from Roxburgh Orchard and had even received a truck load of fruit from Hawkes Bay.

The Otago Farmers Market has also started supplying both ''quality and quantity'' in the form of fresh fruit and vegetables, and even gourmet meat, Ms Manning said.

FoodShare had only been going for 20 months but had grown so rapidly a new warehouse was needed.

Mrs Wells said items like flour, rice and noodles were what they needed most to bulk up the other items in the food parcels.

People can help by supporting the upcoming 2013 Community Can and Christmas Treat Appeal on December 12 or by dropping goods off to the food bank agencies.