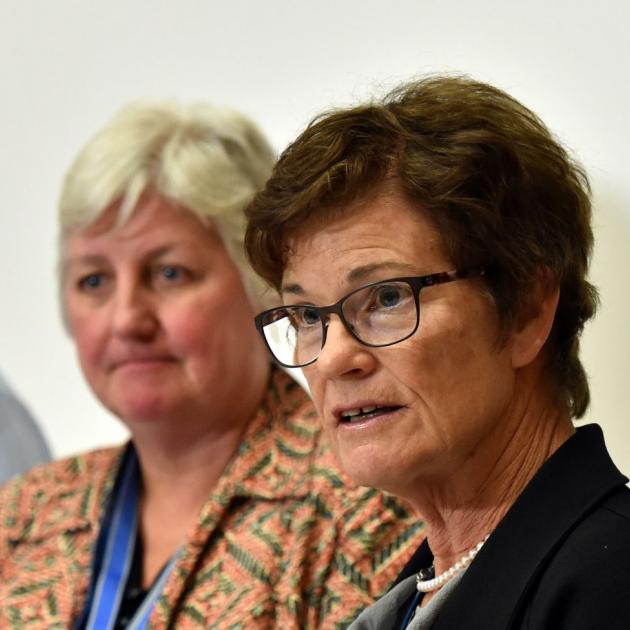 Carole Heatly (left) and Kathy Grant. Photo: ODT
The Southern District Health Board has refused to release documents that spell out the commissioner regime's plans for southern healthcare.

In a response last month, chief executive Carole Heatly refused the request, claiming they were "not yet finalised'' and thus, to allow the "effective conduct of public affairs through the free and frank expression of opinions'', could be kept secret.

In a report to Dr Coleman last September, commissioner Kathy Grant, who is paid $1400 a day for the special role, said she hoped the plans would be delivered to his office later that month.

"These additional work plans are designed to support both the delivery of the key performance targets in the period to October 2016 and the enhancement of underlying systems, processes and capabilities which are fundamental to the refocusing of the SDHB and the achievement of both short and longer term targets,'' Mrs Grant's report says.

The commissioner team has been reluctant to state in clear terms its plans to turn around the board's fortunes.

The team was installed in June after Dr Coleman lost patience with the persistent deficit and dismissed the board members.

A one-page document presented to staff and stakeholders in November talked about improving the organisation's culture, communication, information and patient systems, but lacked specifics.

The Otago Daily Times has complained to the Office of the Ombudsman about the board's decision to withhold the plans.

Efforts to source the information through requests to Dr Coleman's office were also unsuccessful.