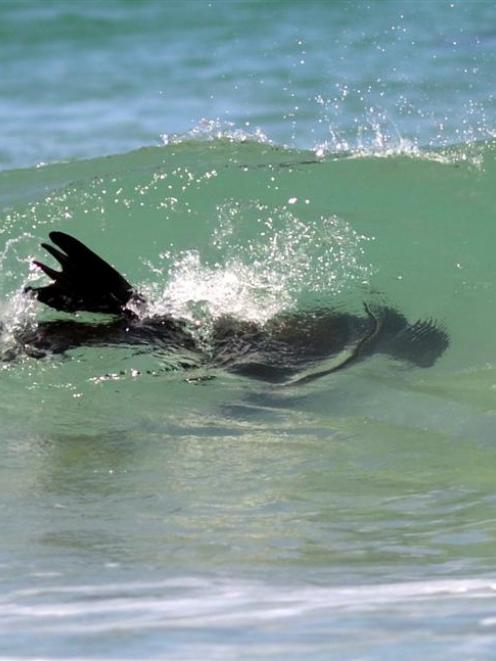 Our fur seal friend returning to the sea. Photo by ODT.
Mystery continues to surround a New Zealand fur seal which surfaced in suburban Dunedin on Monday.

It appears the adult male may have landed in the upper harbour and then spent about 12 hours visiting properties in residential Andersons Bay early on Monday.

It was eventually netted by Department of Conservation staff in the backyard of 26a Gresham St and released at Tomahawk Beach shortly after 2pm on Monday.

New Zealand Post shift worker Nicki Templeton spotted the 150kg seal in Silverton St, just a few hundred metres from Andersons Bay Inlet, at 3am on Monday on her way to work.

''I thought some drunk hoon had dragged a rubbish bag out on to the middle of the road, until it sat up and lunged at the car as I drove past. The police were rung and notified at that stage,'' she said yesterday.

''At 4am, I spoke to a courier that also lives on Silverton St, as she arrived at work, and she said it was still in the middle of the road, but had moved up to the top of the street.

''From the general direction of travel, it has probably come up the harbour and crossed Bayfield Park, before it set off up the hill,'' Ms Templeton said.

''From when I first spotted it, it has spent nearly 12 hours taking a tiki tour of the suburbs, before getting back to sea.''

''It was good call by the person to contact us. But, at that time, we were dealing with offenders involved in a smash and grab. The seal didn't require an immediate response, but it was good for us to know about it,'' he said.

Police were obliged to turn up if there was danger, ''but in a case like this, we take our lead from Doc''.

Doc coastal ranger Jim Fyfe said it was the largest seal he had seen in a suburban environment.

''It doesn't surprise me if he came from the upper harbour. They'll often go under the wharf piles. But what's motivated him to climb a big hill like Silverton St is beyond me. It's a bit of a hill for a seal.

"Perhaps he's got a smell of good ocean water on the other side and thought it was a short-cut.''

With it being the breeding season, the seal's visit was a good reminder to treat sea mammals with respect and give them space, Mr Fyfe said.

''It's their home and their habitat and we should impact on wildlife as little as we can. We're also very keen to hear about any sea lion pups being born. They're a nationally critical species and they're being born around our city beaches at the moment.''