Sense of justice undimmed at 97 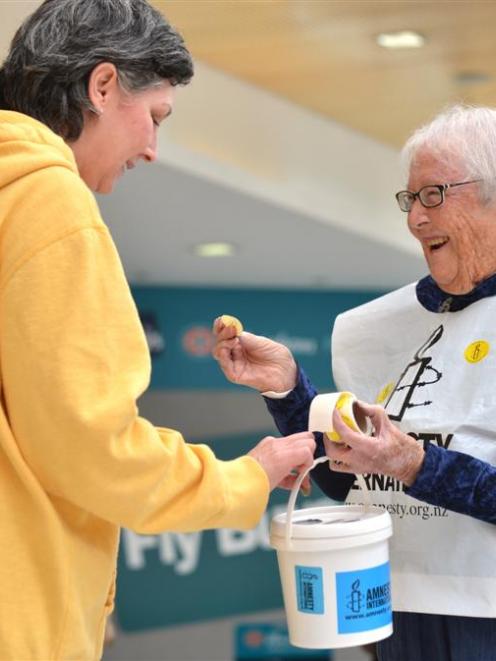 Dawn Ibbotson (right) hands out a sticker to Tenoch King while collecting for Amnesty International in the Centre City Mall in Dunedin yesterday. Photo by Peter McIntosh.
Dawn Ibbotson may be 97, but she is proof you can never be too old to make a difference.

After working with Amnesty International for more than 30 years, Mrs Ibbotson was again doing her bit for the cause yesterday, collecting at Centre City Mall for its annual appeal.

While out collecting, she said she would continue working for the charity as long as she could and "time will tell" whether she would still be collecting when she was 100 years old.

She enjoyed her work with the charity and felt it was important to help others.

"It's such a positive thing to care for others - it's a very important part of life, I think," Mrs Ibbotson said.

She was a founding member of Dunedin's Presbyterian Women Amnesty International group and has filled the role of co-convener since the branch formed 31 years ago.

"It has been a very interesting 31 years." She was "not sure" if human rights had improved over the time she had been involved with Amnesty, but was positive she and the other volunteers had made a difference.

"At least we know we have done something to get people released when they have been prisoners of conscience."

One of the important ways the group made a difference was by sending letters to countries where prisoners were held.

"We have from time to time had reports of action that has been taken because of our letters," she said.

Mrs Ibbotson, who still lives independently, had also raised more than $10,000 for Amnesty selling pressed-flower cards she made from flowers in her garden. The cards had also raised money for about 30 other causes.