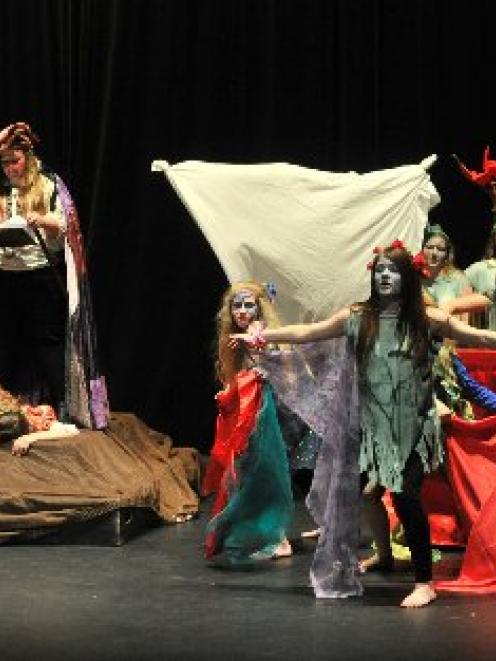 Queen's High School pupils perform a scene from The Tempest at the opening of the University of Otago Sheilah Winn Shakespeare Festival, at the Kings and Queens Performing Arts Centre on Wednesday night. Photo by Linda Robertson.
Shakespeare fans have been lending their ears to pupils this week.

More than 200 pupils from 13 Otago secondary schools performed in the 2014 University of Otago Sheilah Winn Shakespeare Festival, which finished at the Kings and Queens Performing Arts Centre last night.

The young Shakespeareans performed 15-minute scenes or five-minute excerpts from 15 of the bard's plays, in the hope of qualifying for the Shakespeare Globe Centre New Zealand Festival, in Wellington at Queen's Birthday Weekend.

The national festival was established in 1992 to enhance life skills through the study, production and performance of Shakespearean works, Otago co-ordinator Erina Caradus said last night.

''Some pupils might find it a bit boring to read, at first, but when they start acting the scenes out they get hooked. The plots still have so much relevance when you bring them to life.

"The younger ones like Macbeth, because it is so dramatic and there are witches in it.''

A Denise Walsh ensemble award was presented in honour of the late Logan Park High School drama teacher, who died last month after inspiring generations of Dunedin pupils and being awarded the New Zealand Order of Merit in 2013 for her services to youth theatre.

A national workshop with Shakespeare tutors will be held in Dunedin from September 27 to October 5.