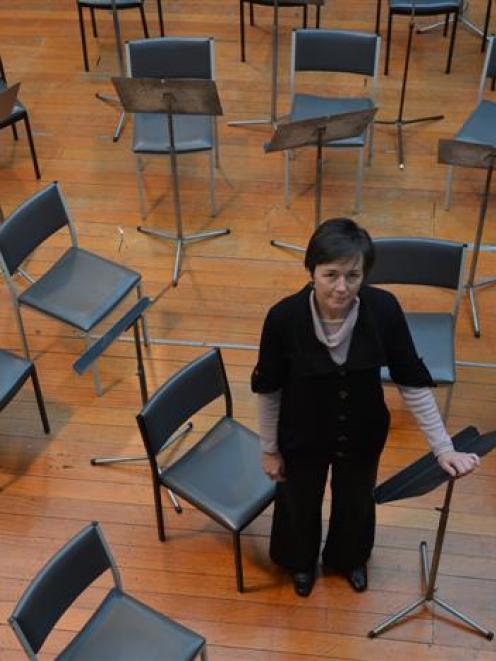 Southern Sinfonia general manager Philippa Harris fears musicians will leave Dunedin if the sinfonia's funding is cut. Photo by Peter McIntosh.
A national review of orchestra funding has struck a nervous note with the Southern Sinfonia.

"In one extreme, the review could result in us getting a large increase and, in another extreme, our funding could be completely discontinued," sinfonia general manager Philippa Harris said yesterday.

The Ministry of Culture and Heritage has called its New Zealand professional orchestra sector review discussion paper a "stocktake" of its orchestra funding.

"We feel under-funded as it is and that our funding is at a low level for the role we're expected to fulfil. We couldn't take any cuts without it being a body blow," Ms Harris said.

"But there are pressures from all five main orchestras for increased funding and we realise that if one orchestra is to get more funding it is going to have to come from another orchestra.

"If we were cut and Christchurch was the only orchestra in the South Island, there would be a dramatic drop in the number of concerts here."

The sinfonia is the only professional orchestra south of Christchurch and, in Otago and Southland, it serves the largest catchment in New Zealand.

"There is a degree of optimism that cutting us off is not an option they're taking seriously, but we don't know, so we are concerned for our future," Ms Harris said.

"Our community role is very diverse within the arts infrastructure, because we also provide essential orchestral support for visiting productions, like the Royal New Zealand Ballet, and local productions, like Opera Otago, the City of Dunedin Choir and Gilbert and Sullivan. These organisations would be very compromised if the sinfonia didn't exist."

The sinfonia performs an average of eight concerts a year and supports 10 other productions.

"If we were cut, it is highly probable a number of players would leave Dunedin and move to other centres. With them would go a significant portion of upper-echelon teachers and students. Out-of-town instrumental students wouldn't come to university here if there was no orchestra," Ms Harris said.

"There has always been an orchestra in Dunedin and we need Dunedin to let the ministry know the depth of support for the sinfonia in this community," she said.

Submissions on the review (due by August 20) can be made on the ministry's website or email orchestrareview@mch.govt.nz