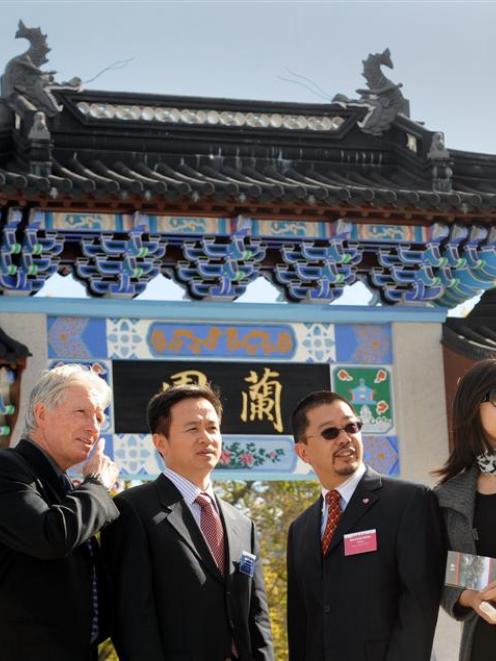 Toshihiro Takahashi was among 100 delegates to gather in Dunedin yesterday for the start of the annual Sister Cities New Zealand Conference, being held this year at Otago Museum.

Mr Takahashi has been based in Wellington since 2007, and yesterday told delegates he was "extremely impressed" by the active relationship between the two countries, fostered in part by sister city links.

New Zealand towns and cities together boasted 42 sister city relationships with Japanese centres, more than New Zealand had with any other country.

As well as Otaru, Dunedin has sister city relationships with Shanghai, in China, Edinburgh, in Scotland, and Portsmouth, in the United States.

Mr Takahashi said the relationship with Otaru, marking its 30th anniversary later this year, was an example of a link that provided "invaluable" economic, cultural, sporting and educational exchanges.

That led to greater understanding between people, contributing to world peace and stability, he believed.

Kenji Ikeda, the director of the Japan Local Government Centre based in Sydney - known as Clair - agreed, saying New Zealand's cities were highly regarded in Japan because of the country's commitment to nature and traditional Maori culture.

Sister city relationships were of great benefit to cities' young people, providing a more multicultural outlook, as well promoting business and other links, he said.

Otago Museum chief executive Shimrath Paul spelt out the benefits sister city relationships had brought to the museum: reciprocal exhibitions allowed the people of Dunedin to experience unique cultural treasures while sharing their own culture.

An example was the decision by Shanghai Museum officials to bring the Emperor's Dragons exhibition to Dunedin in 2008.

Such was the value and sensitivity of the collection, direct approval from China's Communist leaders in Beijing was required before the exhibition was allowed to travel, he said.

Some of the items were up to 6000 years old and had never before left China. They were flown to New Zealand accompanied by officials, and were escorted by police from Christchurch to Dunedin, he said.

Officials from Otaru Museum, in Japan, had also agreed to bring a collection of rare, delicate and extremely valuable hand-crafted kimono bridal wear to the Otago Museum in 2005.

Such was the strength of the relationship, the entire collection was given to the museum at the end of the six-month exhibition, turning Otago Museum into the home of one of the largest collections in Australia and New Zealand overnight, Mr Paul said.

"It was just mind-blowing," he said.

The relationship, signed in 1994, and Otago's commitment to its Chinese heritage had impressed a visiting delegation from Shanghai in 2002, securing a commitment from the officials to help Dunedin's Chinese community build the garden, he said.

Pieces of the garden were manufactured in Shanghai and shipped to Dunedin for assembly by specialist tradesmen from China, he said. The relationship also helped secure a $1.2 million discount on the construction contract.

Delegates were welcomed yesterday morning by a singing Dunedin Mayor Peter Chin, who praised the event and urged them to explore the city.