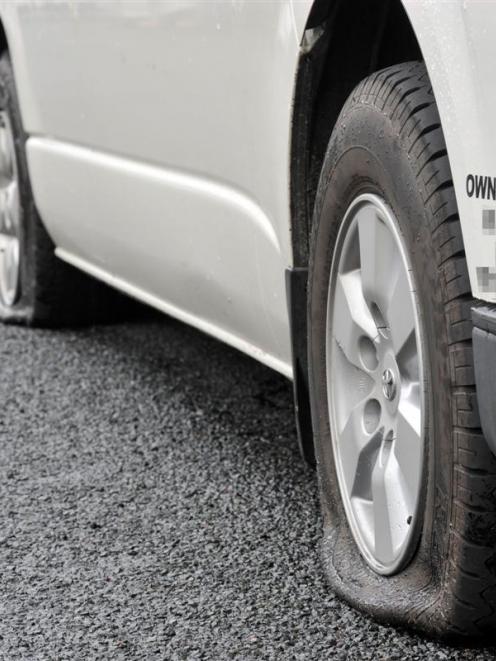 The slashed tyres of an Airport Shuttles Dunedin van could indicate a malicious rivalry within the Dunedin taxi community. Photo by Craig Baxter.
The deliberate slashing of 12 tyres on airport shuttle vans has raised suspicions about a taxi war in Dunedin.

On arguably his busiest day of the year, the manager of Airport Shuttles Dunedin awoke to discover all the tyres on two of his vans with luggage trailers had been slashed overnight.

The vehicles were parked in Bowler Ave, Mornington, and were tampered with about 2am on Saturday, he said.

''A neighbour heard some noise about 2am, but didn't get up to see what it was.''

The manager, who asked not to be named, had taken almost 300 bookings for Saturday, mostly from tertiary students arriving in Dunedin to start their first semester.

He believed a rival was behind the wilful damage, which was ''definitely not random''.

No other vehicles in Bowler Ave were touched and the vans had always been parked in the street without incident, the manager said.

''It was a deliberate act to try to get us off the road on the busiest day of the year. Of course, you can't point the finger or blame anyone, but you don't have to be a rocket scientist to figure out a rival is behind it.''

He alerted police and used four spare tyres to get one of the vans on the road as early as possible.

Other vehicles were dispatched to meet all the Saturday bookings, so there was no loss of business, but replacing the tyres would cost about $2500, he said.

Whether the damage was covered by his insurance would be known this week.

Another Dunedin shuttle operator, who did not want to be named, said he believed it was ''highly unlikely'' a rival was responsible for the slashing.

''From our point of view, we work together well with all the companies at the airport,'' he said.

Senior Sergeant Dave Scott said police would welcome any information about the incident.