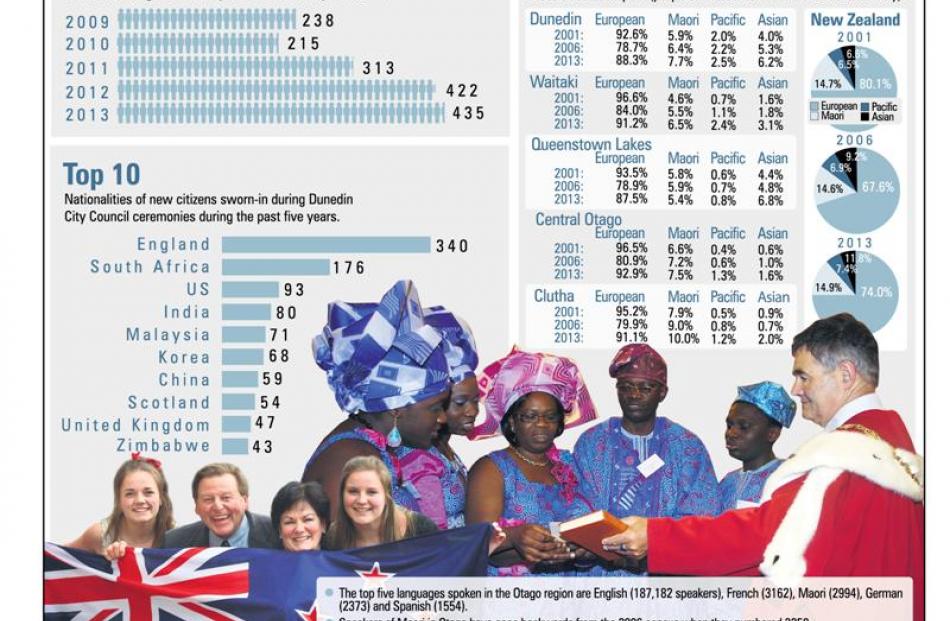 The face of the Edinburgh of the South is changing - slowly.

Statistics from the latest census show ethnic diversity in Dunedin is on the rise and increases in all ethnic groups were reported in last year's census.

Those who identified themselves as Maori rose to 7.7% from 6.4% in 2006, while those of Asian ethnicity rose to 6.2% from 5.3%. Small increases in the number of Pacific people and those of Middle Eastern, Latin American and African ethnicity were also reported.

The trend was mirrored throughout Otago as increases in all ethnic groups were reported in Waitaki, Central Otago and Clutha districts. The only exception was Queenstown Lakes district, where those of Maori ethnicity declined to 5.4% from 5.9% in 2006.

Those of European ethnicity increased across Otago's five districts and Statistics New Zealand general manager census Sarah Minson said the change was due to a campaign which encouraged people to write ''New Zealander'' as their ethnicity in the 2006 census.

The increased diversity of the city's ethnic background added a ''richness'' to the city - ''some of the performances and experiences that are on offer bring the world to Dunedin in a way we couldn't previously enjoy'', Dr Clark said.

Ms Minson said while Otago had ''been traditionally less diverse'', the ethnic make-up of the region was changing.

''There is a change. It's just not as fast as ... Auckland, but there is certainly a steady increase of people of non-European ethnicities,'' Ms Minson said.

One thing which stood out in the 2013 census was the number of speakers of Tagalog living in Otago, she said.

The number of Tagalog speakers rose to 762 in last year's census from 195 in 2006 and Ms Minson believed it was due to the number of Filipinos working in the growing dairy industry.

Slow population growth and a perceived lack of work opportunities were among the reasons Otago lagged behind the rest of New Zealand in ethnic diversity, as was the fact most immigrants to the region came from the UK, she said.

Dr Clark echoed her thoughts and believed regional development was essential to bring immigrants into Otago's communities and develop ''harmonious relationships'' and the challenge for Government was to ensure there was ''meaningful work available'' for immigrants in cities apart from Auckland and Christchurch.

Increased ethnic diversity held benefits for Dunedin and Otago in the form of ''increased economic productivity'' and it developed children's skills in interacting and communicating with people from different backgrounds, he said.

Dunedin Multi-Ethnic Council migrant women and children facilitator Afife Harris said she had witnessed a transformation in Dunedin's ethnic diversity since she moved to the city from Lebanon 25 years ago.

The city was European in tradition and culture when she arrived and there were not ''a lot of people from different countries''.

''Now there's so many people in Dunedin from different countries'', she said.

She did not feel any discrimination when she arrived and she believed Dunedin was an open and welcoming city.

''They [Dunedin residents] are very good with the migrants,'' Mrs Harris said.

''They welcome the migrants, they understand what they need ... they appreciate the people who come here.''

Race Relations Commissioner Dame Susan Devoy said New Zealand's growing diversity was a ''great part of the story'' of the country and was ''something we can all be proud of''.

''New Zealand is a world leader in building harmonious communities, but we need to keep working hard to justify our reputation,'' Dame Susan said.

Dunedin had the opportunity to develop new initiatives which connected and integrated migrants into the city's culture and encouraged more to move to the city, she said.

Increased diversification offered many benefits to the city as ''globally, we are more interconnected than ever'', she said.

''Our diversity can be a source of new opportunities and innovation,'' Dame Susan said.

''It gives us a wider talent pool, connections to new countries, international markets and networks.''