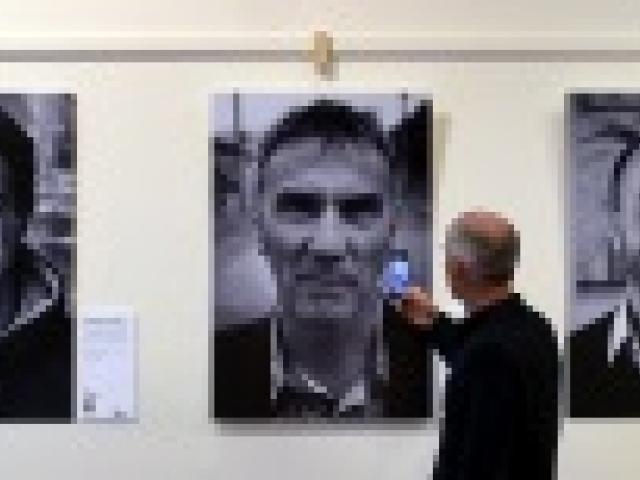 Using his cellphone, Phil King, of Wellington, takes a photo of his brother Steve King, of St Clair, who appears in the ‘‘People of South Dunedin’’ exhibition at the Community Gallery. Among the community identities photographed are (from left) Bronwyn Halley, John Ayoub, Matthew Bradley, Steve King, Whetu Cormick, Alofa Lale and Ranui Ellison-Collins. Photo by Peter McIntosh.
If you live in South Dunedin, these are some of the people in your neighbourhood.

Paul Allen, Ferg Campbell and Paul Le Comte have spent the past year photographing 34 South Dunedin identities for their ‘‘People of South Dunedin'' exhibition at the Dunedin Community Gallery.

Mr Allen said the photographic essay tells the story of South Dunedin by capturing images of people for whom the area forms a significant part of their life, work and community, whether now or in the past.

‘‘You go to funerals and find out about people after they've died, and you wish you knew that information while they were still alive.

‘‘We decided to do a project where we would highlight some people from South Dunedin.

‘‘Of course, we couldn't cover everybody, because there is no way we could do it justice by getting everybody that we wanted to.

Mr Allen said Dr Mills was a retired GP who worked in the area from 1983-2015. For many years, he held the national record for the most patients seen in an afternoon - 81.

‘‘Not everyone would recognise him outside of the context of going to the doctor. He's someone whose life and work has impacted on the lives of so many people, but you wouldn't necessarily recognise him walking up the street.''

‘‘This project is all about building community and encouraging people to look at the people around them and find out a bit more about the people they see on the street,'' Mr Allen said.

‘‘You'll find some people have quite a significant history in the area.''

The exhibition continues until 6pm on Sunday.