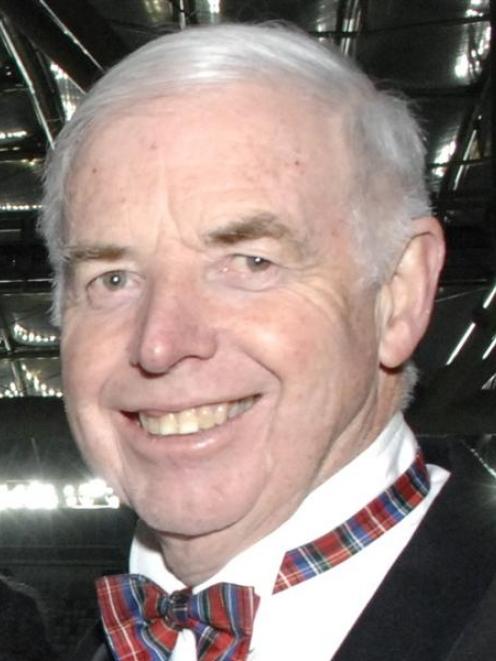 Sir Eion Edgar
A Queenstown woman married to a Chinese construction business owner is being linked to the $100 million waterfront hotel planned for Dunedin.

However, supporters of the hotel project are remaining tight-lipped, while Dunedin City Council staff maintain they do not need to know the identity of the project's backers before granting consent.

The response followed public submissions calling for the developers to be identified before the hotel's resource consent hearing in December.

The Otago Daily Times understands the Queenstown woman is Jing Song, a University of Otago graduate now working as an accountant and adviser for Betterways Advisory Ltd. Betterways is the development company behind the hotel, headed by director and Dunedin lawyer Steve Rodgers.

Ms Song last year married Ping Cao, the owner of a major Chinese construction business, in a lavish ceremony in Nelson, and her father, Lizhen Ning, was a prominent businessman in China, the Nelson Mail reported.

It is understood the pair are the key players behind the hotel project, with Mr Cao providing capital. Rumours about the pair's involvement have been circulating online.

Betterways staff did not respond to requests for comment yesterday. They said Ms Song was in a meeting and not available and neither could Mr Rodgers be contacted because he was overseas.

Queenstown businessman Sir Eion Edgar, a staunch supporter of the hotel, would neither "confirm nor deny" the rumours about the pair when contacted yesterday.

He confirmed he knew the developers behind the project and had agreed not to reveal their identities at this stage.

Ms Song's positions at Betterways had been listed on the Queenstown Chamber of Commerce website, but her details had since been removed after rumours swirled about her link to the hotel project.

Chamber chief executive Anne Lockhart confirmed her staff had not altered the listing, but each company on the database had access and was able to make changes.

"They must have done it themselves ... we definitely didn't," she said.

A previously working link to Ms Song's online Linkedin profile had also been deactivated since the rumours began.

The secrecy surrounding the project came as council staff were inundated with more than 150 submissions - most arguing against the hotel project - before the deadline for public feedback tomorrow.

Critics of the project included Sean Ross, of Dunedin, who in a submission said he was "hugely uncomfortable" trusting the "mystery developers" without knowing more about their other projects.

"Why are we trusting these people? Because they have money?"

Mr Rodgers, of Betterways, has previously said the developers wanted to remain anonymous for now, to avoid "negative" comments.

Dunedin Mayor Dave Cull yesterday said he did not know who they were, but it could be argued not knowing "makes things more objective" during the consent process.

"It prevents people from objecting on the grounds of a culture or a race or an identity that they personally have some animosity for.

"Whether the person's a male or a female, or a Mongolian or Peruvian - I think that's secondary, frankly."

Council resource consents manager Alan Worthington said he did not know the identity of the developers, but said, "We have no need to know."

The Resource Management Act required only the identity of the person, or the company and directors, behind an application, and council staff had checked to confirm Betterways and its sole director, Mr Rodgers, were "real", he said.

"That's all we need to do," Mr Worthington said.

Sir Eion believed the identity and track records of those behind the hotel would eventually be revealed, and would impress people.

"I have met the people. I am incredibly impressed and they are of enormous credibility.

"They've done a lot larger projects than this ... You couldn't get a more credible party to be doing it."