Speech contest winner has much to say 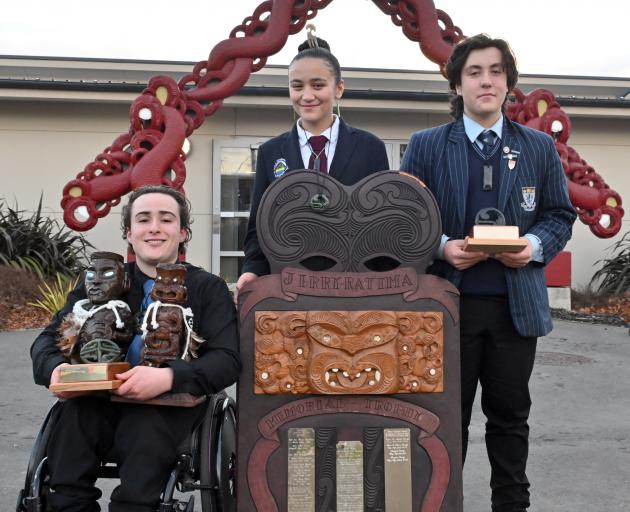 Displaying their well-earned trophies are three of the nga toa whakaihu waka o Nga Manu Korero 2019 (winners of the Nga Manu Korero 2019 speech competition) at Taieri College (from left) Kiringaua Cassidy (15), Maia Rakete-Gray (13) and Taumana Pene (17), all of Dunedin. PHOTO: LINDA ROBERTSON
A three-time winner of a Maori school speech competition is calling for better education on the colonial history of New Zealand and its continued effects on tangata whenua.

He has earned a place in the national finals in Palmerston North in September.

The 15-year-old's win comes after he won two prizes in junior sections in previous years.

Kiringaua joked he was "speechless" following his latest triumph.

His speech strived to enlighten the audience on the struggles of Maori since the arrival of Europeans.

"My main topic was about how Maori are living as visitors in our own land and about the history of colonisation," he said.

He also discussed the Maori Representation Act of 1867, which created four Maori seats in Parliament

There were now seven such electorates but there remained insufficient representation of Maori, and especially of te reo speakers, at the highest levels, he said.

Kiringaua, who is home-schooled, said after his win, he wanted better teaching of New Zealand history in schools.

"Just the real history of how our country was founded ... to enlighten people on the struggles Maori have gone through since the arrival of Europeans. There's still a long way to go."