Spending up in Dunedin 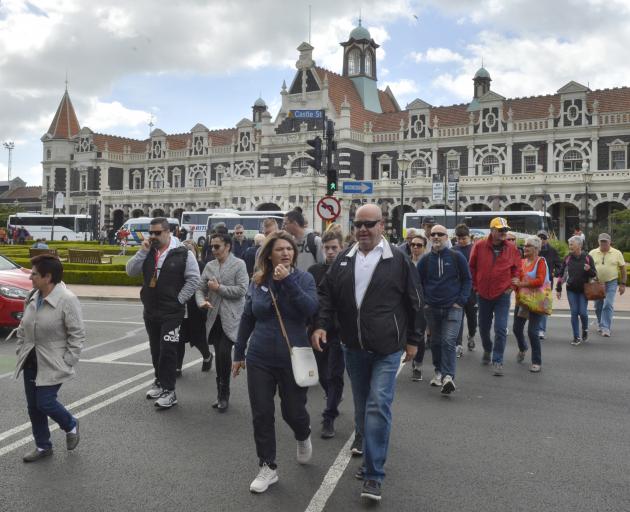 An increase in cruise ship passengers in the city was noted by the Dunedin i-Site as being a contributing factor in Dunedin's strong tourism sector spending. Photos: Gerard O'Brien
Dunedin's tourism organisation has received some welcome figures, showing something is going right in the sector.

That contrasts with news from last year, when Enterprise Dunedin was criticised for lagging behind other centres.

Economics consultant Infometrics released figures this week showing the city's tourism spend was above the national average with a 6.2% increase over the December 2018 year.

That compared to a 4.3% increase nationally.

And Dunedin scored a high 15% growth rate on the Ministry of Business, Innovation and Employment monthly regional tourism estimates for January.

Enterprise Dunedin director John Christie said the latter figure should be taken with a grain of salt, but he was happy with what he saw.

The Infometrics figures showed Dunedin commercial accommodation guest nights rose by 3% over the same period, above the New Zealand-wide 2.3% increase.

Mr Christie said Dunedin's economy was in good shape, something the figures reinforced.

"It's also encouraging to see a number of new tourism operators entering the market, which is diversifying the offering for visitors and increasing opportunities for local employment in the industry.''

Examples were Karitane Maori Tours and Port to Port Cruises, both of which opened last year.

Enterprise Dunedin would look further into where the spending was coming from.

However, an increase in cruise ship passengers in the city, and an increase in spending from the free independent traveller market, something noted at the Dunedin i-Site visitor centre, was part of it.

The Chinese market was down a little, but that was being countered by other markets.

The recent announcement from Air New Zealand of reduced fares to the regions meant Dunedin would become even more accessible.

Chamber of Commerce chief executive Dougal McGowan said the results clearly outlined the continued period of growth the city had experienced for the last four years.