Sports for all abilities provides opportunity to try something new

''Stand away, everybody. I don't know what's going to happen.''

It was sound advice from Hunter Edgecombe as he prepared to throw a dart at a dart board for the first time yesterday, during the Otago All Abilities Sports Day and Expo at Forsyth Barr Stadium. 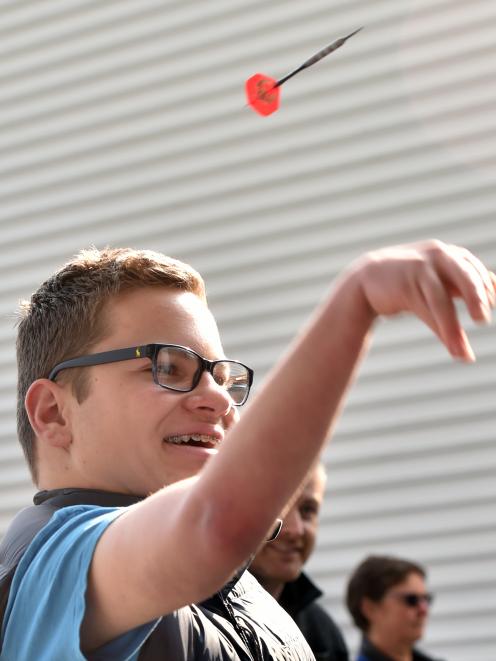 Hunter Edgecombe tries his hand at darts for the first time, during the Otago All Abilities Sports Day and Expo at Forsyth Barr Stadium yesterday. Photo: Peter McIntosh

The Taieri College 14-year-old has arthrogryposis multiplex congenita (AMC) which means he has decreased flexibility in his joints, making it difficult for him to throw a dart with pinpoint accuracy.

Although he missed the dart board completely on several attempts, his face beamed.

It was a great opportunity to try something new and make new friends, he said.

There were also stalls from several sport and recreation organisations, which aimed to foster new connections.

Hunter said life with AMC was ''frustrating'' at times because his body would not let him do a lot of the things he wanted to do, and some people were not supportive in his bid to navigate everyday life.

So he was particularly looking forward to playing adaptive football yesterday.

''There's something fun about kicking a ball. It gets rid of some of those frustrations.''

He said he was not a great fan of sport, but it was necessary for him to keep fit.

''If I can have fun and meet new people while I'm doing it, that's a bonus.''

Hunter was one of about 50 pupils from schools around Otago and Southland at the event, hosted by the Halberg Foundation and Parafed Otago.

It aimed to enhance the lives of physically disabled young people through sport and recreation.