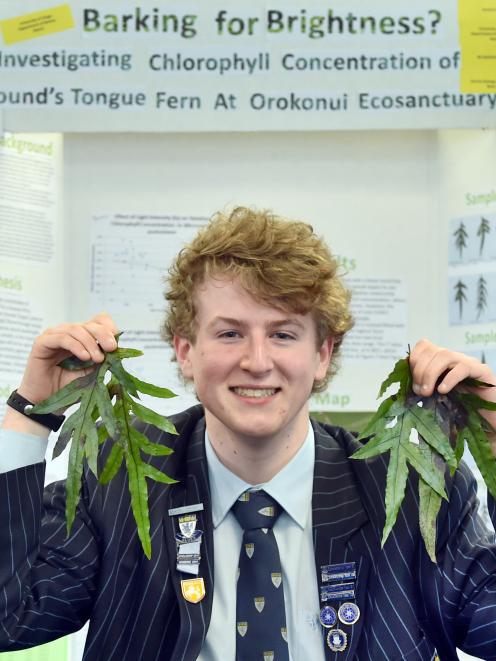 King's High School pupil Aaron Hewson with some of the Hound's Tongue Ferns he studied for his award-winning research at the recent Aurora Energy Otago Science and Technology Fair. Photo: Peter McIntosh
Aaron Hewson has worked many a late night on science research projects, only to find the results are inconclusive.

His latest research for the Aurora Energy Otago Science and Technology Fair was no different. It, too, yielded inconclusive results.

But this time, his project won five awards, including the Premier Best in Fair Award.

''It's important to know how our native plants are going to survive, how flexible they are, how can they change when the conditions change.

''Light is one big thing that determines how plants grow.''

He said he was trying to see if the colour of a plant changed if it received more or less light.

''Essentially, I tried to see if I could correlate light intensity and the amount of chlorophyll a plant had (based on image processing) to see if there was some kind of relationship - which there wasn't, sadly.

''I couldn't really confirm it because the data wasn't strong enough.''

Because of the result, he was surprised to win so many awards.

''This is my third year doing the science festival, and every project I've done has yielded inconclusive results.

''It's really heart-wrenching because you put a lot of time and effort into it and try to get a nice answer out of it.

''But that's the reality of science - you're not always going to get a nice answer out of it.''

He said his success at the science fair showed the awards were not for the results of his research.

Rather, they were for the thought processes behind gathering the results.

Aaron was one of 323 pupils who presented 268 entries from 28 schools across the Otago region.