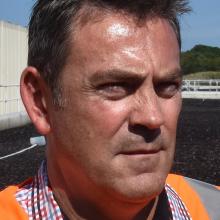 Chris Henderson.
A "high level" report on possibilities for South Dunedin’s stormwater infrastructure has been completed, but more detailed investigation is required before possible options and costs are made public.

Acting water and waste group manager Chris Henderson said the council was still working on options for the area that was badly affected by flooding in 2015, and is at risk from sea level rise because of its low-lying nature.

Major planning for the infrastructure will be part of next years’s long-term plan process, a three-yearly consultation to plan and organise budgets, but the council will hear at this month’s annual plan deliberations of funding needs for detailed work required before than.

Mr Henderson yesterday responded to an Otago Daily Times request for an update on the issue.

The options were expected to be presented this year.

At a council meeting in May last year, Dr McElhone estimated upgrading the entire city’s stormwater network so it could withstand a one-in-10-year storm event could cost hundreds of millions, if not more than a billion dollars.

Mr Henderson said yesterday staff had done their high level options report, and were in the process of putting together a business case to investigate "the realistic options" in more detail.

That would need to go before the council for approval to proceed.

However the department’s intention was for funding requirements to do detailed work on some of the options to be discussed as part of this year’s annual plan.

Until detailed work was done, it was not possible to provide accurate costs for the various options, "but we want to flag up something needs to be done, and needs to be done in the next 10 years".

Options in the report ranged from a complete renewal of the stormwater network in South Dunedin down more simple plans like creating holding areas for flood water, and "a whole lot of options in between". Those included providing additional pumping facilities.

Work was also being done to study the impact of overflow from other catchments during weather events.

Dr McElhone said last year there would be modelling of water flowing into South Dunedin from other areas, which was "quite significant" during the 2015  flood.

Mr Henderson said staff were still in the process of looking at that, creating a hydraulic model and working with the Otago Regional Council on a model that included over-land flow paths.

"We’re trying to put all the information together from both the ORC and ourselves so we can have a cohesive picture," he said.