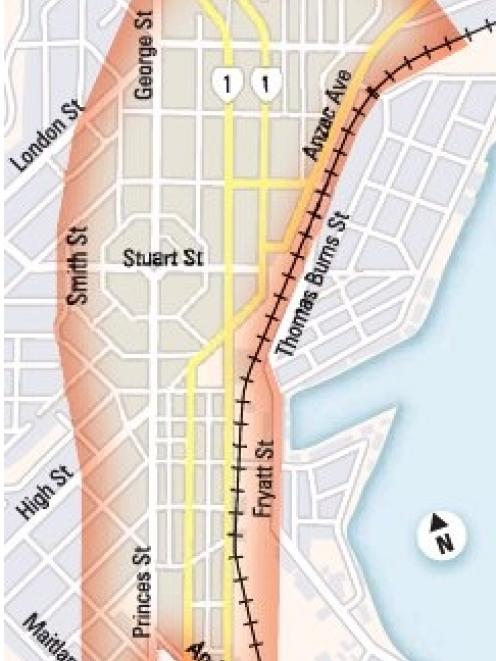 The future of Dunedin's central city is to come under the microscope as the city council sets its sights on the future shape of the area that includes the prime retail zone.

Early work on the central-city strategy, approved last week, will be developed alongside the South Dunedin retail centre strategy, with the two initiatives expected to play an important role in shaping the city's future.

Both came before the council planning and environment committee last week to be considered by councillors.

The South Dunedin strategy was begun last year, with the council's newly-formed urban design team taking on one of the city's more intractable problems - improving the look and feel of South Dunedin and its business district.

An "issues and opportunities" consultation was held this year, and an update on the result was included in a report from principal urban designer Steve Miles.

While respondents valued the "funky, quirky" shops in the retail area, the heritage architecture and the ease of parking, they were concerned about the poor appearance of buildings, the overall look of the area, and traffic congestion.

City development manager Anna Johnson said last week the central-city strategy would ask the question: "what sort of city do we want to be?"The area being considered runs from the Oval to the Otago Museum, with a western boundary the main trunk railway line, and the eastern boundary three of four blocks from George St.

The role of the city and suburban centres would be considered, and the strategy would be similar to South Dunedin's, but would include changes to the district plan, meaning changes to land zoning.

The future role of the Octagon, the Exchange and nearby heritage areas would be covered.

Both strategies would be very important for the future of the city, she said, and signalled a more integrated approach, a "very different approach" to the past.

Deputy mayor Syd Brown said at the committee meeting Dunedin needed to ensure it did not make the same mistakes as Christchurch, a city that had "lost its heart", with retailing moving to suburban areas.

Urban design projects manager Emma O'Neill said in her report the strategy would consider issues from the perspective of transportation, urban design and planning, economic development, and community and recreation.

Research and analysis would begin this month, initial consultation next year, with a final strategy and action plan produced early in 2012.