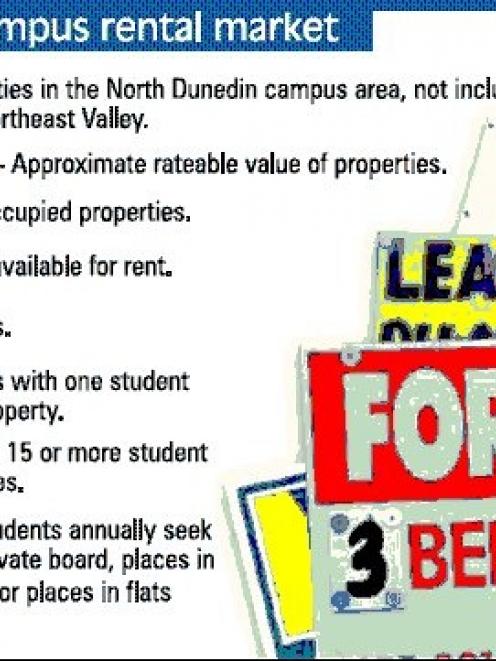 More North Dunedin student flats than usual have been placed on the market this year.

The lift has been partly fuelled by landlords whose flats have remained vacant for months longer than expected, but real estate agents say such is the demand for campus investment properties, well-priced rentals are being snapped up by buyers.

Students usually sign up for flats towards the end of the previous year and agree to year-long leases from January 1.

This year, a small but significant number of flats remained vacant through January, February and March, with a handful still vacant last week.

Neither he nor real estate agents spoken to could say definitely why more flats had remained vacant, but factors mentioned were the Otago University Students Association's campaign advising students not to sign up too early, a decline in overseas students coming to Dunedin to study, and the flow-on effect of last year's 1.7% drop in enrolments at the University of Otago.

A real estate agent who did not want to be named said a small number of landlords had dropped room rents to try to attract tenants.

A small number unable to cope with the unexpected loss of income had put their properties on the market.

Barclay Sievwright, a real estate agent who sells only campus investment properties, said he also had a few landlord clients who were "moving out because they thought it [being a landlord] would be easier".

He has owned student rental properties for about 30 years, has sold campus investment properties for the past 14 years, and now works with his sons Lane and Clayton.

He said there was a huge demand for investment properties under $500,000 and properties were selling quickly.

The past three months had been the trio's "busiest ever".

Since the start of February, they had sold 33 properties with a value of close to $11 million, not far short of what they usually sold in six months, he said.

Mr Sievwright said if properties were presented and marketed correctly, they would not remain empty.

"Gone are the days when landlords can do nothing to a property and expect high rents."

Matt Cutler, of Cutlers Real Estate, said he had only been specialising in campus properties for the past few months but demand had been high.

While sales and median prices overall had been good for the past five months and were showing an upward trend, it was important that trend was not overstated, she said.

"Things are slightly more positive, but we are still nowhere near the boom times [up till 2007]. There is still a shortage of stock for sale."

OUSA president Logan Edgar said he was not sure if the students' association's campaign discouraging students from signing up early for flats had led to the increased number of vacant flats this year, but said it would be great if it had.

"It is probably more to do with supply catching up with demand," he said.

"But because there were more vacant flats for longer, this year would be a really good opportunity to tilt the balance the other way in favour of students.

"Wouldn't it be amazing if this was the year landlords knocked $20 off the rent [per room] because students held the negotiating power."