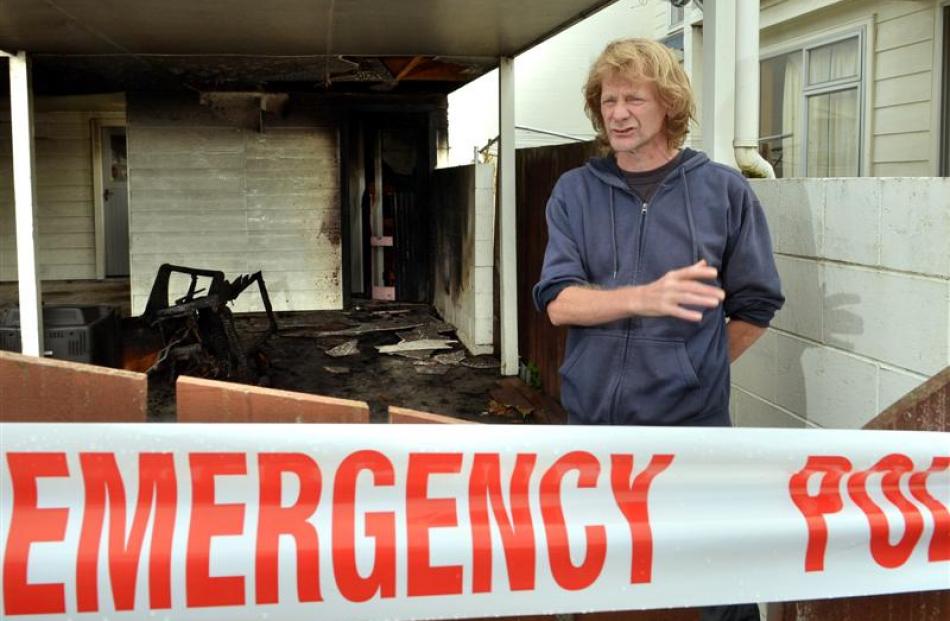 Leith St resident Nick Maydon was woken up by passers-by telling him the carport at his Housing New Zealand flat was on fire. Photo by Stephen Jaquiery.

Deliberately-lit property fires in the student quarter could kill someone, a detective investigating the case warns.

''If it continues at this pattern then we will have an arson that will turn to a fatal fire,'' Detective Sergeant Brett Roberts said yesterday.

His comments come after another suspicious blaze in Leith St early yesterday - the second arson in two days in the street, with four also reported in nearby Grange St early on Wednesday.

Resident Nick Maydon fears an arsonist might be on the loose.

The Dunedin man was asleep in his Leith St North home when he was woken up by ''this banging and crashing, and this guy is saying: `Get out'.''

The carport of his Housing New Zealand flat was severely damaged after an armchair left in his driveway was set alight just before 3.30am yesterday.

He said he was thankful for the people who woke him up and contacted the Fire Service.

''If [the fire] had gone any further than the shed ... it would have spread and that would have been it.''

A security guard was yesterday watching over the property. The charred items were cordoned off.

The previous night a flat on Leith St was targeted when an armchair on the porch was set alight, while the same night four suspicious fires were reported in neighbouring Grange St.

Mr Maydon said it looked like a pyromaniac was on the loose.

He had lived on the street for several years and said fires were normally lit in the middle of the street during big parties, ''but this is a bit different''.

And his message for anyone lighting fires: ''Get your brain sorted out mate, because you are putting people's lives at risk.''

That message was reiterated by Det Sgt Roberts, who said fires were particularly deadly when people were asleep, and it was a concern a property with vulnerable tenants had been targeted.

He warned anyone who caused the death of a person would face a manslaughter count or more serious charges, and anyone caught lighting or fuelling a fire also would be charged.

Police had no lines of inquiry, and it was too soon to say if the fires were the work of the same person.

• It was possible the offender had boasted of their actions and Det Sgt Roberts urged anyone who had any information to contact him directly on (03) 471-4800, or provide information anonymously on 0800-555-111.