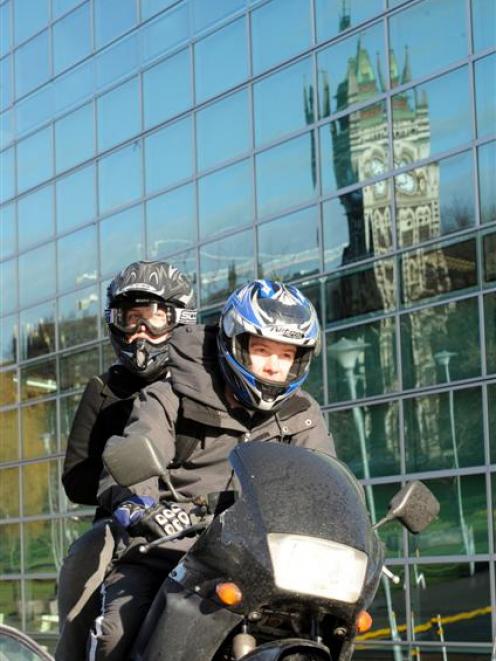 Dunedin students Thomas Gee (rider) and sister Hannah (pillion) say two wheels are better than four when it comes to finding a park within the increasingly congested University of Otago campus area. Photo by Stephen Jaquiery.
Students are resorting to drastic measures as the morning scramble for car parks heats up at the University of Otago.

And some are blaming the Dunedin City Council's new parking strategy, which they say has led to office workers boycotting the central city and taking cheaper, or free, campus parks instead.

The changes, combined with the recent loss of informal parking at the nearby Forsyth Barr Stadium site, meant campus parking was now almost non-existent, he believed.

Mr Gee has resorted to taking his motorcycle to campus, often with sister Hannah (19), a second-year medical student, perched behind him, as motorbike parks were easier to find, he said.

Students running late for lectures were resorting to parking in driveways nearer campus - whether or not they knew the occupants, Mr Gee said.

"Some people get real stressed out about it. You can see some people parking in driveways, jutting out from people's driveways," he said.

He made the swap to a motorbike after circling North Dunedin streets for up to 45 minutes, hunting for a park, in the days since the council's new parking machines became operational on July 6.

It was the type of cruising the council's new strategy aimed to discourage in George St, because of the congestion problems it created.

Mr Gee said he preferred to drive from his Waverley home, rather than walk or catch a bus, as it allowed him to return home and study during breaks between lectures.

However, the hunt for parks had taken him as far north as Gardens New World, and both he and his sister had also resorted to parking in the Meridian shopping mall's car park, he said.

"I have been late three or four times in the last two weeks. You would leave and think you have enough time, and then the parking would be quite shocking," he said.

Flatting students were also contributing to the problem, when each flatmate owned their own car and parked it on the street.

Council development services manager Kevin Thompson said staff were monitoring the use of the city's new meters, but it was too early to say if the students' claims were correct.

"It might be correct. It might not be... The whole thing needs to bed down," he said.

A three-month block of transaction records would provide staff with a clearer picture and could lead to changes if required, he said.

That would be above initial forecasts which predicted about $1 million.

"The unknowns are `is that going to continue like that?'," he said.

A council working party would meet on Wednesday to confirm some changes, following complaints in the past two weeks.

A formal review of the new parking system was also planned in 12 months.

The council has received 269 complaints about the new parking regime since its introduction, Mr Thompson said.