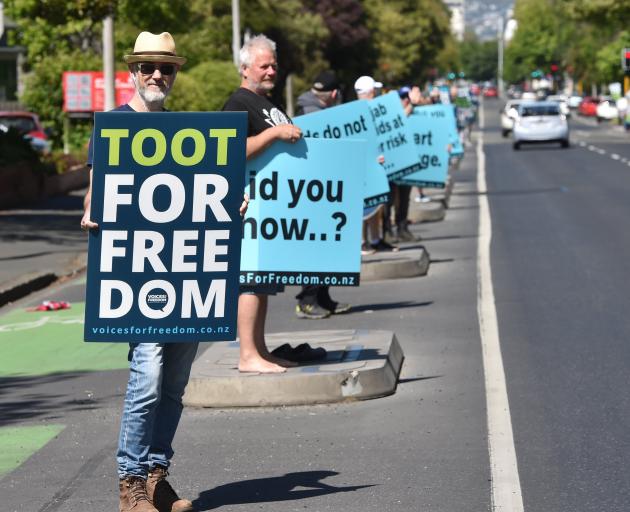 Between 20 and 30 members of Voices for Freedom, the group behind national distribution of leaflets which contain misinformation about the Pfizer vaccine used for Covid-19, attended the Cumberland St rally.

Voices for Freedom Dunedin co-ordinator Tracey Pita said the protesters supported the right to choose whether or not to receive a vaccine, specifically for healthcare, education and corrections.

The group held signs asking passing vehicles to "toot for freedom", which inspired three University of Otago students living nearby to come outside - in their pyjamas - to investigate the source of honking car horns.

Maddy Blore, a second year student at the University of Otago, was unimpressed by the display.

"This is a common walk for students down to the library.

"It’s absolutely ridiculous we have to walk past and read this while we’re waiting to get the country to a 90% vaccination rate," she said.

Zoe Murphy, also a second year student, said she was surprised by the number of toots the signs were getting from passing traffic.

However, in her opinion, many of those sounding their horns were doing so without knowing what it was they were tooting at.

It was difficult to figure out what the protest was actually about, second year student Rylee Hunt said.

"But if you really want freedom, listen to the Government and help to get the vaccination rates up."