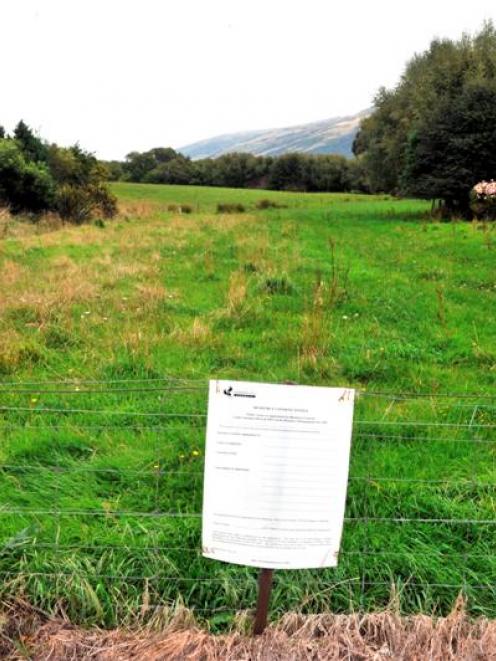 This site on Formby St is proposed for development into a 28-lot subdivision. Photo by Linda Robertson.
The development of a 28-lot subdivision at Outram will bring more people to the township, which will be good for it socially and economically, says the Dunedin City Council committee that has approved the rezoning of 7.7ha of rural land for the project.

The council's hearings committee says it is confident the concerns of the community and the committee about the original proposal have been addressed, and it has agreed to allow the site off Formby St to be rezoned from rural to residential, paving the way for the subdivision.

However, it warns other landowners thinking the doors are open to more development in Outram that the decision is not setting a precedent, because the Formby St site has singular features in its favour of development.

In its decision, released this week, more than two years after the application for a private plan change was made, the hearings committee of chairman and former city councillor Colin Weatherall and councillors Andrew Noone and Kate Wilson, said rezoning the area from rural to residential 5 was the most appropriate way to address residential demand in Outram, where there were few sites available, without taking over too much of the area's high-class soil.

The development might also help alleviate pressure to develop areas of high-class soil and zoned residential 5 in Outram now used for market gardens, the decision said.

If the plan change succeeds through an appeal period, the subdivision would represent a 10% increase in the number of homes in the township.

The committee said the applicant, Two Note Ltd, had made several changes to its proposal, including introducing 2m setbacks, 9m height restrictions and a rationalisation of the site.

The application attracted 27 submissions, with 22 of those opposed to the proposal.

Common among concerns were the effects on the character and amenity of Outram, its infrastructure capacity, and the potential loss of high-quality soils.

The committee said it did not consider the ambience or character of Outram would be adversely compromised by additional residential activity on the periphery of the township, and the new setback and height restrictions addressed concerns about effects on the amenity of existing properties.

It also did not consider the site, which was effectively landlocked by a waterway, useful for stock grazing.

''[It is] to some extent an infill development and represents a logical expansion of Outram.''

Having heard evidence at a hearing last year that the site was never well used for market gardening, although potatoes had once been grown there, and following a site visit, the committee said it ''preferred'' the applicant's evidence the site was not largely high-class soil.

The developer would pay for any infrastructure upgrades required to meet the demand from the subdivision, stormwater runoff and waste water from the development would be managed appropriately and the town's existing roads could cope with the additional traffic.

While it might potentially be the case that a precedent was set for developing land around Outram, the Formby St site had some features that distinguished it, the committee said.

Notably, it was bounded by a natural water feature that separated it from the remaining rural land.

''While in general terms, other landowners may be buoyed by a positive outcome, they may not gain much traction relying on the precedent argument.''

Skerries St resident David Cottle, who made a submission in favour of the proposal, said he was pleased by the news because an influx of new people would help keep Outram's businesses, school and local community vital.

Gordon Mockford, of Christchurch, the sole director and shareholder of Two Note Ltd, and understood to have family links to Outram, was unable to be contacted yesterday.

Another developer's application for a private plan change was last year rejected by the committee because the development would allow the spread of residential development into rural areas at the expense of productive high-class soils when there was no evidence of clear demand for the subdivision.

The council is presently in mediation with Balmoral Development (Outram) Ltd, whose application to rezone 6.7ha of rural land on the northern edge of Outram for residential use was rejected by the committee last year.

When contacted yesterday, Balmoral developer Neville Ferguson, of Omarama, said he had no comment about Mr Mockford's success.