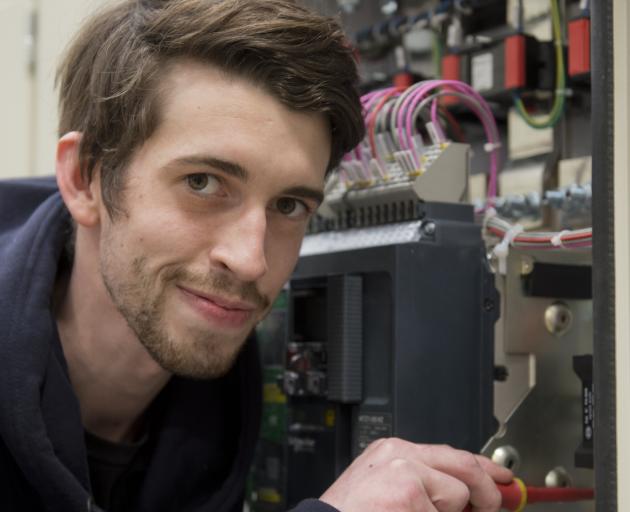 Otago Polytechnic electrical student and Switchbuild Ltd apprentice Kent Marshall has won the industrial category of the Dunedin Master Electricians Apprentice Challenge. PHOTO: GERARD O’BRIEN
There are only two things that really make apprentice electrician Kent Marshall’s eyes light up. One is accidentally touching the wrong wire, the other is winning competitions.

The 22-year-old Otago Polytechnic electrical student and Switchbuild Ltd apprentice’s eyes had a sparkle this week after he won the industrial category of the Dunedin Master Electricians Apprentice Challenge.

He is now set to be one of the top five across the country who will represent their regions at the national finals in Wellington in October.

Mr Marshall said he was only just starting out in his career, and to find himself already winning competitions was very rewarding and exciting.

"I’m really enjoying what I’m doing and that’s the biggest thing for me.

"It makes it so much easier to do study in your own time."

However, he said the "high" of winning had since turned to nervousness about the final.

"I feel I have a responsibility to both Switchbuild and Otago Polytechnic to do my best.

"They have both been really supportive of me and really helped me start my career."

So much so, he was employed at Otago Polytechnic as a technician over the summer holidays during his study.

Mr Marshall graduated as a bachelor of engineering technology (electrical engineering) at the end of 2021 and was successful in gaining employment with Switchbuild through Otago Polytechnic’s industry connections.

He is now completing a managed apprenticeship through Otago Polytechnic and is hoping to qualify and gain electrical registration by early 2024.

The commercial/domestic category of the competition was won by Plunket Electrical apprentice Dennis Clarke.