Surfing made to look easy 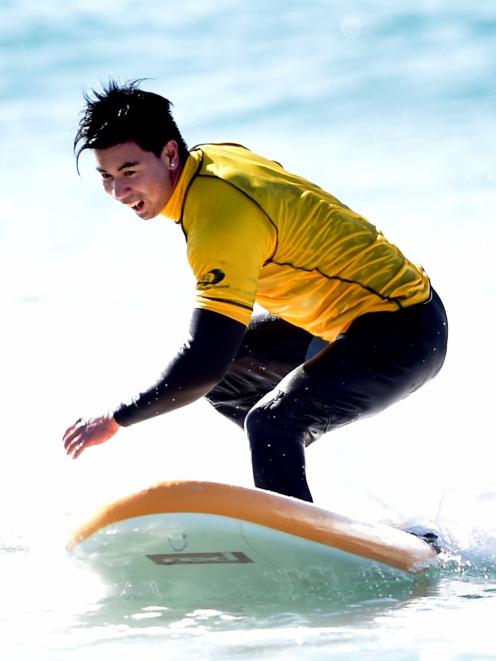 Jono Brownjohn takes part in the surfing event at the Halberg Water Sports Day at Brighton Beach on Saturday. Photo by Peter McIntosh.
It is no mean feat to ride a wave on your first try, let alone on one leg.

But 19-year-old Jono Brownjohn did just that as he took to surfing for the first time at the Halberg Water Sports Day at Brighton Beach on Saturday.

Mr Brownjohn, from New Plymouth but in Dunedin on a gap year, was one of 18 participants in the sports day organised by the Halberg Disability Sport Foundation and sponsored by Flight Centre.

Mr Brownjohn's left leg was amputated below the knee at birth and he wears a carbon fibre blade.

He had set his sights on qualifying as a sprinter for this year's Paralympics in Rio de Janiero but that plan was scuppered when he fractured a toe on his right foot in two places earlier this year.

Although he took to surfing like a duck to water, it would remain a pastime, he said.‘‘It was pretty good fun, different to all of the water sports that I've done.‘‘I'll definitely give it another go, but not competitively.

Surfing was one of four sports which featured in the event on Saturday.

The others were boogie boarding, kayaking and stand-up paddle boarding.

‘‘If we had to write a wish list for the day, this would be it - good vibe, good energy, good waves, good weather.''

Many more events would be held during the year to help maintain the interest of the participants, she said.

The first of those would be a stand-up paddle boarding event at Watercooled Sports in Dunedin this weekend.

‘‘We don't want to dangle that carrot then not have something for them to go on to.''

There were 32 volunteers from various organisations at the event.