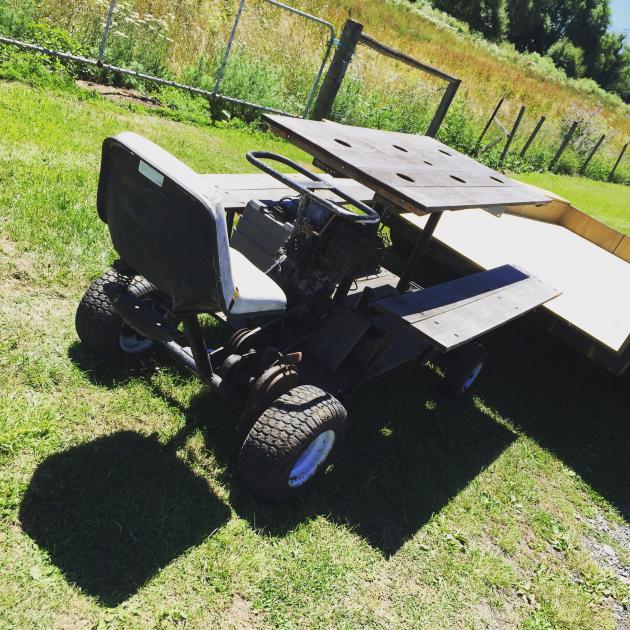 Mosgiel joiner Wade Bryce Bovey (21) left the Dunedin District Court on Tuesday with a common conviction to his name but the circumstances were anything but.

''One night me and a mate decided we'd take it to the pub,'' he told the Otago Daily Times.

Prosecutor Sergeant Chris George helpfully explained what exactly ''it'' was to the court.

''The picnic table is a wooden table with seats on both sides, a driver seat and controls that is on wheels, which is motorised by a 398cc engine,'' he said.

''It's quite the work of art,'' Sgt George said, handing pictures of the vehicle to Judge Dominic Flatley.

''Indeed,'' the judge said, after perusing the images.

On January 27, Bovey and his friend were seen by a passing police car pushing the quirky machine, which he had ''acquired'' from a man in Christchurch, up Queen St to his home.

''It didn't have enough power to get up the hill,'' he explained.

Bovey hoped the officers were going to lend a hand but instead he was breathalysed.

A summary of facts said the defendant showed signs of recent alcohol intake but Bovey said it required little detective work on the police's part.

He blew a level of 678mcg and was fined $750 and banned from driving - any vehicle, including motorised tables - for six months.

Counsel Elliot Higbee said his client had been off alcohol since the incident and was working hard to stay out of trouble.

''He instructs he has ceased associating with the type of people involved in operating motorised picnic tables while under the influence of alcohol,'' he said.

The submission drew a raised eyebrow from Judge Flatley.

''You have a very poor attitude and that needs to change,'' the judge told Bovey.

When discussing the case with the ODT outside court, his new-found infamy was apparent as a couple walked past.

But Bovey had to decline, since he had sold the bespoke buggy.

''It was a bad idea getting it in the first place,'' he said.

Bovey would only call the sale price ''an undisclosed amount'' but said it was much more than what it was worth.

And where will it turn up next?