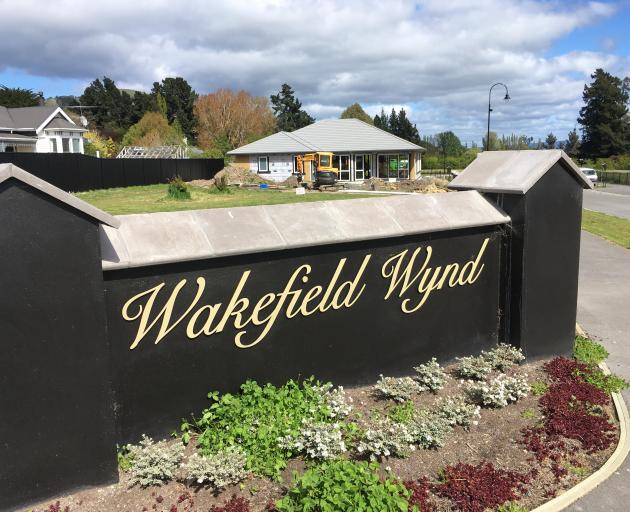 A fence with the name Wakefield Wynd at the entrance to a new subdivision off Riccarton Rd East. PHOTO: SHAWN MCAVINUE
A battle to name a road in a new East Taieri subdivision has taken another turn.

A development company whose plans to name a road "Wakefield Wynd'' were rejected by authorities last year is having another crack at using the suffix "Wynd'' on two other roads.

In August 2017, the Dunedin City Council, with the backing of the Mosgiel-Taieri Community Board, rejected a proposal from developer AKGO Ltd to name a new road "Wakefield Wynd'' in a new residential subdivision off Riccarton Rd East.

The council did not support the use of the suffix wynd because it had the potential to confuse emergency services and the public, and the road was more of a cul-de-sac than a wynd.

At a board meeting in June 2017, Gallaway Cook Allan law clerk Amin Osama argued wynd should be approved because NZ Post considered it acceptable and it was in use in Taupo, so a precedent had been set.

Mr Osama argued a wynd was defined as "a narrow lane between houses'' which "turns off the main street'', so the road "satisfies the interpretation''.

The council named the road Cuddie Close at a council meeting on April 16 this year.

AKGO Ltd continues to use the name Wakefield Wynd to market the sections.

At a board meeting last week, board members told council transport group manager Richard Saunders the suffix wynd was being used to market another AKGO Ltd residential subdivision in Cemetery Rd, East Taieri.

"I'm sure he's just making a point, so we'll enjoy going through the process again,'' Mr Saunders said to board members.

Mr Saunders told the Taieri Times the council had not received an application to name the roads in the new subdivision in Cemetery Rd.

"So I cannot comment on those. Staff are unlikely to support the use of wynd for the same reasons as last time.''

When Taieri Times visited Cemetery Rd on Monday, a large board on the edge of the subdivision promoted the development as "William Wallace Wynd'' and stated the "Dunedin City Council to vest cul-de-sac and through roads'' named "Sir Wallace Wynd'' and "Sir William Wynd''.

The final words on the board are "Quality Always Wyns''.

Subdivision project manager Kim Taylor said on Tuesday he would fight the council to use wynd for the new roads off Cemetery Rd.

He believed the council's argument for rejecting the use of the suffix was not valid.

"Developers should have the right to name the road.''